Jennifer Rubin offers some Thanksgiving cheer at Pajamas Media. I don’t agree with every word of her post, but I love these parts:

First, President-elect Barack Obama won by assuring voters he would pursue tax cuts, victory in Afghanistan, prevent Iran from acquiring nuclear weapons, and go â€œline by lineâ€ through the federal budget to eliminate waste and unneeded programs. We can doubt his sincerity or ability to achieve these ends, but he won by recognizing and espousing center-right principles. If he pursues some or all of them, the country will be the better for it. If he doesnâ€™t, he is unlikely to succeed or maintain the broad-based popularity needed to keep Democrats in power.

Second, Hillary Clinton, James L. Jones, and Robert Gates are on tap to fill key national security roles. This is not the crew to bug out of Iraq before the job is done, repeal FISA, rush off to meet with Ahmadinejad, or support a 25% cut in defense spending. On national security, the president-elect in essence has conceded that the Leftâ€™s vision is impractical and dangerous. …

Ninth, President George W. Bush and General David Petraeus persevered against tremendous odds and have placed us on the verge of one of the great military turnarounds in our history. We can disagree about the wisdom of the decision to go to war in Iraq, but a victory with a stable Iraq allied with the U.S. and a humiliated al-Qaeda is now within our grasp. By avoiding defeat and empowering an Arab nation to take up arms and defeat Islamic terrorists, Bush and Petraeus furthered the security of the U.S., the region, and our allies around the world.

Rubin’s post is headlined “Ten Reasons for Conservatives to be Thankful.” I substituted “Republicans” in my headline because after describing myself as a liberal for most of my life, I can’t quite get my brain wrapped around the idea that I’m a conservative. I’m certainly right-of-center on economic and national security issues, but I’m pro-choice and I favor marriage equality for same-sex couples. I guess that makes me a libertarian… except hard-core libertarians tend to oppose the Iraq war, which I strongly support.

Also, once you get too far out on the libertarian spectrum you’ve got anarchy. This 64-question libertarian purity test gives you extra purity points for a desire to abolish government, privatize roads, police forces, etc. I’m a big fan of capitalism and market-based incentives, but I think we need some government.

Here’s a much shorter quiz (10 questions) to help locate your political identity. Here’s the result I got: 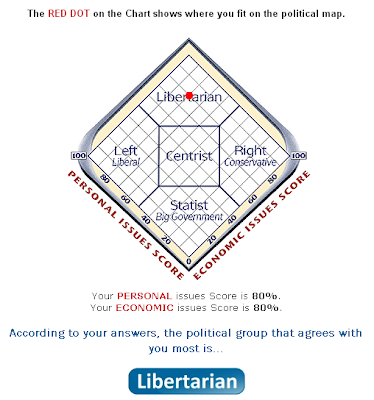