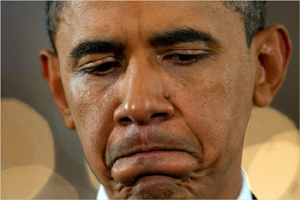 A friend and former co-worker (“hi Father Tom!”) teased me by phone today about being at my day job when I could be blogging about the election.Â  I told him I knew there would be no shortage of commentary today about the election, and I didn’t think my dozens of daily readers are parked on my blog and repeatedly clicking the refresh button.

But what if I’m wrong about that?Â  From what I know about how Google Analytics works, I’m pretty sure a hundred clicks on the refresh button would still get logged as only one visit.Â  So if you recognize yourself in this paragraph: 1) get a life; and 2) could you at least click on the ads once in a while?Â  (Note to Google AdSense snipers: that was a joke — I’m not really trying to generate artificial ad clicks.Â  I will take this opportunity to explain, however, as allowed by AdSense guidelines, that my Google AdSense “earnings” to date total $62.79, or an average of 12 cents a day since May 2009.Â  (Ka-CHING!) I put “earnings” in quotes because I won’t see any money until if and when the total reaches $100.)

Where was I?Â  The election — which would seem like an even bigger win for the Republicans if not for the fact that a few zealots predicted a Senate takeover.Â  I don’t have much in the way of original brilliant insights, but I’ll share some of the best commentary I’ve seen today.

After watching President Obamaâ€™s press conference, Democrats who are still left standing must have been mortified. The depth of his self-delusion was stunning. To put things in perspective: the Democratic Party just suffered the worst repudiation any political party has since before the middle of the last century. …

If you listened to the president, though, the â€œshellackingâ€ was because of process rather than substance. ObamaCare, he assured us, is a sparkling, wondrous law; the only downside to it was the horse-trading that went on to secure its passage. They would be â€œmisreading the election,â€ the president helpfully informed Republicans, if they decide to â€œrelitigate the arguments of the last two years.â€…

What we saw today was less a president than a dogmatist â€” a man who appears to have an extraordinary capacity to hermetically seal off events and evidence that call into question his governing philosophy, his policies, and his wisdom. The election yesterday was above all a referendum on the presidentâ€™s policies, yet his big takeaway was not to relitigate his agenda. …

The author of one of the worst political debacles in American history seems to have learned almost nothing from it.

President Obama came close, but he still just cannot admit that his radical policies and their effects on the economy are the cause of his devastating political rebuke. …

For most of the press conference, a humbled but deer-in-the-headlights Obama half-heartedly argued that the populist outrage against his own massive debt, huge wasteful government, and elitism was really outrage against the economy he inherited, an outrage that he shares. We donâ€™t know it, the president hints, but we are still angry at the Bush years, and yesterday mistakenly took our wrath out on Obamaâ€™s methodical, albeit too slow, efforts at recovery. In short, there was little admission whatsoever that Obamaâ€™s message and the way he pushed it turned off millions â€” there was no repentant Clinton, circa autumn 1994, here; instead, a shocked Obama who seems hurt that we do not appreciate him.

I donâ€™t think the American people â€” who just last week heard their president boast that Republicans had to sit in the back seat, and that Latinos should punish their Republican â€œenemies,â€ and who have now given him the greatest midterm putdown in over a half-century â€” suddenly will pay much attention to his calls for an end to the old divisiveness.

During his press conference this afternoon, President Obama insisted that the American public doesnâ€™t want to â€œre-litigate the past.â€ Roughly four minutes later, he insisted that he inherited the deficit, which got worse because of a recession he inherited, as well. Somehow Obama forgot to mention that he increased spending 23 percent, tripling the deficit in the process.

No wonder he doesnâ€™t want to re-litigate the past. …

For a year, as he relentlessly pushed a healthcare bill, against public opposition, his advisers kept telling the press that once he got his healthcare priority passed, he would â€œpivotâ€ to focusing on jobs. So while the country bled jobs from its economic jugular, Obama crammed through an unpopular piece of legislation that wouldnâ€™t fully kick into effect until 2014. He did not do so in secret. â€œA crisis,â€ his chief of staff explained numerous times, â€œis a terrible thing to waste.â€ But the point he wants people to take away is that all of the runaway spending on his watchâ€”much of which was focused on â€œreformsâ€ that, by design, will do nothing to deal with the recession for years, if everâ€”was all done for an emergency that he inherited.

Barack Obama’s election, The New Republic’s John Judis wrote two years ago, “is the culmination of a Democratic realignment that began in the 1990s, was delayed by September 11, and resumed with the 2006 election.” This was truer than Judis realized, for he seemed not quite to grasp that a culmination is the reaching of the highest point. He imagined new highs still to come…

In his victory speech, [Florida Senator-elect Marco] Rubio–quoted by blogger Jonathan Adler–issued a very pertinent warning to his party:

We make a great mistake if we believe that tonight these results are somehow an embrace of the Republican Party. What they are is a second chance, a second chance for Republicans to be what they said they were going to be not so long ago.

Rubio is absolutely right. Pajamas Media’s Frank J. Fleming summed it up best when he observed last month that Republicans were going to “win huge” because they “kind of suck”–in contrast with the Democrats’ “Godzilla-smashing-through-a-city level of suck–but a really patronizing Godzilla who says you’re just too stupid and hateful to see all the buildings he’s saved or created as he smashes everything apart.”

If we assume that Republicans remain in general disrepute, one must conclude that John Judis got it exactly wrong two years ago. This was a thundering rejection of Obama-style liberalism.

I’ll close with a Facebook quote from a liberal friend who was sharing a HuffPo article about Mississippi Gov. and uber-Republican Haley Barbour:

“A short portly white conservative from a small town in the Deep South” vs. Obama in 2012 – the outcome of that would sure tell you something fundamental about this country, wouldn’t it?

Yes, it would tell you that conservatives outnumber liberals.