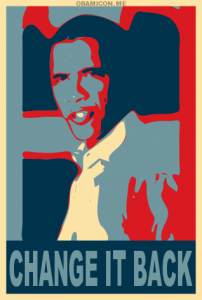 Patrick Caddell and Douglas Schoen, who self-identify as “traditional liberal Democrats,” are calling out the President for fomenting “the politics of polarization, resentment and division.”Â  They accuse him of Nixonian levels of compromising the majesty of the Presidency.

The news peg is Obama’s recent statement, “We’re gonna punish our enemies and we’re gonna reward our friends who stand with us on issues that are important to us.”Â  They also cite his contempt for the American people (“reacting just to fear”) and for his Democratic base (“sitting on their hands complaining”).

They also discuss the rank hypocrisy of Obama — who broke his explicit promise to accept the Nixon-inspired strictures of public campaign financing — complaining about the source of Republican campaign funds.

As Election Day approaches, the president and others in the Democratic leadership have focused on campaign finance by moneyed interests – an ancillary issue serving neither party nor country. They have intensified attacks on business groups such as the U.S. Chamber of Commerce and individual political operatives such as Karl Rove and Ed Gillespie – insisting that organizations are fronting for foreign campaign money and large secret donations and campaign expenditures. Even the New York Times has noted that “a closer examination shows that there is little evidence” that these organizations have engaged in activities that are “improper or even unusual.”

To be clear, we favor disclosure of every dollar spent and closing the disclosure loophole that exists as a result of the Citizens United ruling. But it is disingenuous for a president – particularly one whose campaign effectively dynamited the lone beachhead of public financing in American politics – to scream about money pouring in against his political interests.

The President campaigned as a uniter and a pragmatist, but he has consistently governed as a partisan leftist.Â  On Tuesday his party will be punished, and his efforts to salvage his own re-election will begin in earnest.

Most prognosticators expect the House to change hands, but foresee only a diminished majority in the Senate.Â  But I remember that in the 1994 Republican tidal wave, the smart money said the Democrats would lose the Senate but hold the House — and they lost both.Â  This election has the same feel to me, and I’m predicting a Republican Senate.Â  I’ll remind you of this on Wednesday if I’m correct.

One thought on “The Divider-in-Chief”