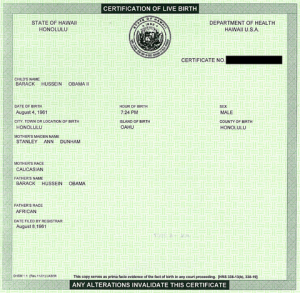 The short-form birth certificate, which should have settled the matter in 2008

I have zero patience for conspiracy theories, and the “birther” loonies are particularly odious.Â  There are plenty of valid reasons for taking issue with President Obama, but to continue questioning the location of his birth in the face of overwhelming evidence is despicable.Â  No loyal American should seek to delegitimize any president on transparently bogus grounds.

And yet the attempts continue, of course.Â  If you look up “right-wing fever swamp” in the dictionary, you’ll find a picture of Pamela Geller, who perpetrates the Atlas Shrugs blog.Â  Within hours of the release of the long-form COLB (certificate of live birth), she was out with a post headlined “Layering: Obama’s New COLB Raises More Questions than it Answers,” labeling the document “an obvious forgery.”Â  I’m not going to link, find it yourself if you insist.

The predictability of the birthers’ reaction serves only to validate Obama’s refusal for two years to seek a waiver to permit the release of the long-form birth certificate.

Even some thoughtful mainstream conservatives are falling into the trap of criticizing Obama over this poisonous topic.Â  Andy McCarthy, while acknowledging that any reasonable doubt about the place of Obama’s birth has long been dissipated, criticized Obama today for not making the certificate public earlier.

Abe Greenwald explains how the birther conspiracy has been detrimental to conservatives:

Imagine itâ€™s early 2009 and youâ€™re the newly elected President Obama. A gaggle of sorry loudmouths are spreading intricate fictions about your parents and your country of origin. The loudmouths are fringy and creepy, as are the conspiracy theorists spawned by every presidency, and youâ€™d be a fool to get into the mud with them. You determine rightly that entertaining that kind of thing is beneath your personal dignity and the dignity of the office.

Only, as time goes on, you notice something remarkable. The media is eager to take those loudmouths and present them as the representatives of all opposition to you and your policies. Without lifting a finger to respond to the lunacy, you enjoy a ready-made security shield that takes the sting out of every legitimate charge against you and renders it the sad, baseless delusion of a massive unhinged right wing.

Why should Team Obama want to give up this powerful advantage over the opposition?

So Donald Trump, in his bid to become the Al Sharpton of the Republican Party, may have done conservatives a favor by latching on to the birther movement.Â  McCarthy and others have criticized Obama for releasing the certificate only after Trump dragged the issue to the fringes of the mainstream, thereby changing the political calculus from favorable to unfavorable.

Well, yes.Â  Sounds like smart politics to me.Â  Since the entire issue is manufactured and there’s nothing at stake, why not?

Two final thoughts.Â  First, am I the only one who thoroughly disapproves of the fact that someone born outside of the U.S. is constitutionally disqualified from becoming president?Â  This stricture made even less sense at the time it was written into the Constitution.Â  If someone disapproves of a foreign-born candidate, let them vote against the candidate.

Second, please spare me the arguments that the birther idiocy is “rooted in racism.”Â  No, it’s not.Â  It’s rooted in the same vandal mentality that led “truthers” to insist that George W. Bush, a white guy, was complicit in the 9/11 attacks.