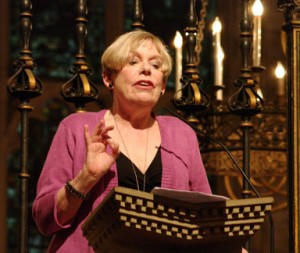 I tried to bait the famous author into a partisan screed, but she was having none of it.

“America is at war in Iraq and Afghanistan, and now our Nobel Peace Prize winning president is taking us into war in Libya.Â  I’d be interested to hear your take on how some of the things you’ve talked about relate to the wider geopolitical scene,” I said to Karen Armstrong, author of more than two dozen books, most recently Twelve Steps to a Compassionate Life.

She spoke tonight before a crowd of 500 at St. Peter’s Episcopal Church in Morristown.Â  It was the initial offering in the John Shelby Spong Lectureship, named after the uber-liberal former bishop of the Episcopal Diocese of Newark.Â  (The event was financially supported by the diocese, where the Web Goddess is Director of Communications and Technology, but she bears no responsibility for what I write here.)

“I’m sorry about these wars, is all I can say” Armstrong said. “After 9/11 there was such an outpouring of support for America, there were demonstrations in Tehran… Unfortunately, these wars have further radicalized people.”Â  All true enough.

Armstrong said all the world’s major religious traditions call for us to have compassion for others, although that does not mean that the religions are all the same.Â  The Golden Rule, which Christians know as “do unto others as you would have them do unto you,” was formulated independently many times, starting with Confucius, 500 years before Christ.

Armstrong struck a number of humorous notes, telling of repeated cab rides in London where the cabbie, upon hearing that she was a religion writer, declared that religion is responsible for all the wars in world history.Â  She described something as a “pie in the eye” notion, showing again that America and Britain are two nations separated by a common language.

I’ve not read any of her books, but I’m looking forward to her latest, 12 Steps to a Compassionate Life, with its deliberate overtones of Alcoholics Anonymous.Â  (The Web Goddess stood on line to get it autographed by the author.)Â  “We’re addicted to our prejudices,” Armstrong said.

In addition to her book, Armstrong is plugging the Charter for Compassion, ” which grew out of a $100,000 TED prize she won in 2008.Â  The charter is “a document that transcends religious, ideological, and national difference. Supported by leading thinkers from many traditions, the Charter activates the Golden Rule around the world.”

“I don’t have much hope of politicians,” she said.Â  I led a modest burst of applause when she described how the most fervent and effective backers of the Charter are businessmen.

If I can get the *#$*&$ voice recorder software to work, I’ll post more comments from Armstrong’s talk this weekend.Â  In the meantime, if you buy her books through my Amazon widget, I supposedly get a tiny piece of the action 🙂