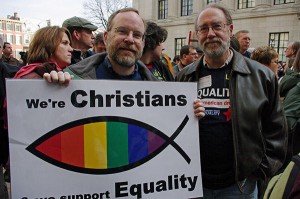 Larry and I have exercised our right to be married for many years. (Our wives are named Cathy and Nina.)Â Our gay and lesbian friends deserve the same right.

My friend Mary Mann at Maplewood Patch has resurrected a photo the Web Goddess took of me and another St. George’s parishioner demonstrating for equality at the Statehouse in late 2009.Â  She used the photo with a story in advance of this afternoon’s first Maplewood Pride picnic, which suddenly became in part a celebration of New York’s historic decision yesterday to allow same-sex marriages.

The Web Goddess and I put on our marriage equality T-shirts and took our beach chairs to the park to enjoy the beautiful day, the music, and the company of gay and straight friends.

At an early break in the music,Â  the mayor tookÂ  the microphone to recognize the event on behalf of the Township Committee.Â  One of the organizers led the crowd in a cheer for the New York legislature, and shouted, “New Jersey is next!” 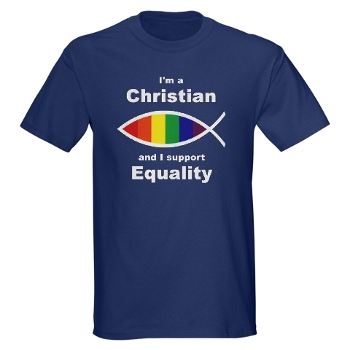 Designed by the Web Goddess. Click on the shirt to order it at no markup from Cafe Press.

A wonderful sentiment, but unfortunately untrue.Â  New Jersey Gov. Chris Christie, whom I admire and otherwise support on almost every issue, vowed before his election to veto any bill legalizing same-sex marriage.Â  On that basis alone, I voted for the Democratic incumbent.Â  Since the New Jersey legislature was unable to pass a marriage equality law in the waning days of the Corzine administration, there is no realistic chance of same-sex marriage in New Jersey as long as Christie is governor.Â  This will be a gut-check issue for me if Christie runs for re-election.Â  Some days it’s not easy being a socially liberal Republican.

As Ronald Reagan may once have said, “The person who agrees with you 80 percent of the time is a friend and an ally â€” not a 20 percent traitor.”Â  Christie’s brand of fiscal conservatism addresses an urgent need in a state which, when he became governor, was facing an $11 billion deficit on a $30 billion budget.Â  As Christie put it, “New Jersey is a failed experiment.” 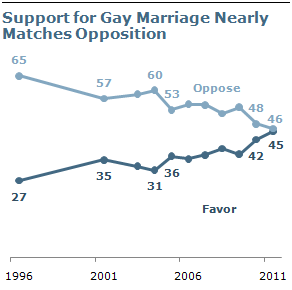 Martin Luther King said “the arc of the moral universe is long, but it bends toward justice.”Â  Pew Research has found that support for gay marriage is growing inexorably, and there’s no reason to believe anything will reverse the trend.Â  As a happily married straight man, it’s easy for me to be patient.Â  Many of my gay friends are understandably less serene.

The fact that I can accurately refer to “many of my gay friends” reflects what one of those friends, a former church warden, once described as “the bubble we live in.”Â  Compared to the state and to society as a whole, gay people are over-represented in Maplewood (in the judgment-free, statistical sense of that term).Â  Within Maplewood, gay people are over-represented at St. George’s Episcopal Church, where the Web Goddess and I have both served as elected members of the Vestry.

The large majority of members of the parish are straight, but gay and lesbian couples are always in evidence. Many of the leadership positions of the parish are filled by gay people, including the senior of the two Wardens and four of the nine other Vestry members.Â  The Rev. Bernie Poppe is gay, although he consistently focuses on being the Rector of a diverse parish, rather than “a gay priest.”

Such an environment makes it easy to be comfortable with the existence of people whose orientation differs from my own. I see gay people kneeling in prayer, raising their children, bringing food to the church picnic.Â  They obey the laws, they pay taxes, they complain about paying taxes (I’m looking at you, Tom).Â  Children who grow up in that environment will almost certainly be gay-friendly citizens as long as they live.

Same-sex marriage is a basic civil rights issue, and the only acceptable outcome is full marriage equality.Â  With every passing year America will bend further in that direction.Â  Faster, please.