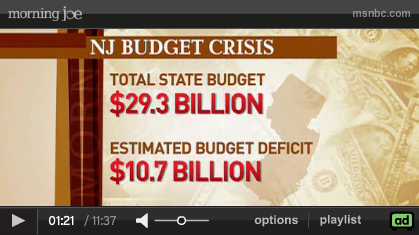 New Jersey “should be seen as the failed experiment for other states and the country … Spend beyond your means and then kill your tax revenue base by raising taxes 115 times in eight years, and then youâ€™re New Jersey.”

Who is this trash-talking, Jersey-bashing heretic attacking my beloved adopted state? Well, he’s the new Governor of New Jersey, Chris Christie.Â  And I find myself liking him more every time I hear him speak.

I reluctantly voted for Corzine in November, because of Christie’s vow to support a constitutional amendment banning same-sex marriage.Â  Then the cause of same-sex marriage in New Jersey suffered a serious setback when the Senate refused to pass a bill in the waning days of the Corzine administration. Â  That battle eventually will be refought, and I expectÂ  I’ll take my shots at Governor Christie then.

But for now, I’m pleased that Christie’s fighting the good fight on fiscal responsibility.Â  The screen capture above from Christie’s recent interview with MSNBC’s token conservative, Joe Scarborough, tells the story starkly.Â Â  Firing up my calculator, the state budget deficit works out to be more than 36% of the total state budget.Â  It may not be an apples-to-apples comparison, but Obama’s larded-up federal budget deficit appears to work out to “only” 33%.

Christie is making the right kind of enemies.Â  One foolish teachers union official undermined the union’s cause by essentially praying for Christie’s death.Â  And what did the governor do to provoke this death wish? From The Daily Riff:

The proposal by Christie: No job cuts in the education sector if teachers contribute 1 and 1/2 percent of their salary to pay for benefits (approx. $750. per year) and have a one-year pay freeze.Â  If not, approximately 1300 jobs will be cut.

Wow, the teachers might have to pay a whole $750 per year (63 bucks a month, about the same as their union dues) for their generous public-employee health insurance. Between the reasonableness of the proposal and the outrageousness of the death wish, I think the governor will be on pretty solid ground when the layoffs inevitably start.

The 11-minute Scarborough interview is worth watching in its entirety for its look at the plain-spoken and candid governor, who talks to voters like adults.

8 thoughts on “New Jersey Is “A Failed Experiment””