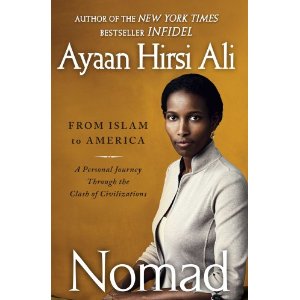 In today’s Wall Street Journal, Ayaan Hirsi Ali calls for a campaign of solidarity with the makers of South Park, who were the targets of veiled death threats after daring to invoke the name of Mohammed on their cartoon show.

The entertainment business, especially Hollywood, is one of the wealthiest and most powerful industries in the world. Following the example of Jon Stewart, who used the first segment of his April 22 show to defend “South Park,” producers, actors, writers, musicians and other entertainers could lead such an effort. Another idea is to do stories of Muhammad where his image is shown as much as possible. These stories do not have to be negative or insulting, they just need to spread the risk. The aim is to confront hypersensitive Muslims with more targets than they can possibly contend with.

Another important advantage of such a campaign is to accustom Muslims to the kind of treatment that the followers of other religions have long been used to. After the “South Park” episode in question there was no threatening response from Buddhists, Christians and Jewsâ€”to say nothing of Tom Cruise and Barbra Streisand fansâ€”all of whom had far more reason to be offended than Muslims.

It will be interesting to see if any groundswell arises in support of the “May 20 Is Everybody Draw Mohammed Day” movement.Â  I still haven’t seen any explanation as to why May 20 was chosen — I’m a little disappointed that Ali didn’t use her WSJ megaphone to support that effort.

But I was delighted to see in the tagline to the WSJ article that Ali has a new book coming out in May: Nomad: From Islam to Americaâ€”A Personal Journey through the Clash of Civilizations. I’ve added it to the recommended books in my Amazon widget at right, and I’m looking forward to reading it. (Hmm… I wonder if I get a cut if I buy a book from my own widget?)