I started noodling with a blog post about the viral video “Hide the Decline” when it first came out late last year in the wake of the Climategate disclosures.Â  The video, produced in a low-rent imitation of the style of the famous Jib Jab masterpiece, is a parody based on the song “Draggin’ the Line” by Tommy James and the Shondells.Â  I had not previously been familiar with the Shondells, but I liked the tune, and thought the video did a good job of lampooning the junk science exposed in Climategate.

But as I watched the video again, I suddenly lost interest.Â  There’s a scene, repeated a couple of times, where Al Gore (unmentioned in the lyrics) is shown behind bars being leered at by two sexually menacing, tattooedÂ  skin-heads.Â  No sale — prison rape isn’t funny. 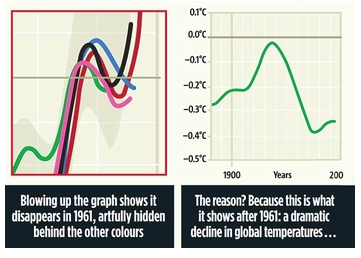 So I was happy today to stumble across a remake of the video, embedded above.Â  The production values in the new version are even more low-rent, but the gratuitous prison scene is gone, and the lyrics have been updated with even more pointed references to the scandal.

Watch the video, then try to get the “Hide the Decline” refrain out of your head.Â  In honor of the remake, I also just bought “Draggin’ the Line” on iTunes.

Michael Mann: Defamed or defined by â€œHide the decline