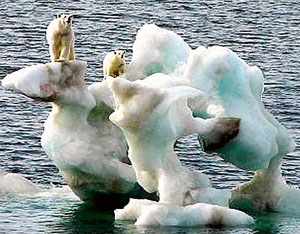 These two may be endangered, but is the species?

Long-time readers (hi, Sweetie!) know that I am not a fan of Rush Limbaugh.Â  Even though my credentials as a critic of President Obama can be easily verified by skimming the Obama tag on my website,Â  I thought it was disgraceful, bordering on unpatriotic, when Limbaugh said of the Commander-in-Chief-elect, “I hope he fails.”

But I am a fan of a lot of conservative bloggers and pundits, which makes it impossible to avoid some exposure to Limbaugh’s oeuvre.Â  So I know that for years, Limbaugh has relentlessly referred to climate-change concerns as “the global warming hoax“.Â  I dismissed this as one more instance of Limbaugh preaching to the dittoheads.

I’ve long been skeptical about the sense of urgency that (some) climate activists display, but I’m not ready to back Limbaugh’s play and call global warming itself a hoax.Â  I think there is enough evidence to warrant concern about global warming, and I certainly think it’s a good idea to explore ways of reducing our dependence on carbon-based fuels such as oil — if for no other reason, because much of the world’s oil supply is under the control of regimes hostile to the United States.

But while referring to “the global warming hoax” may be a step too far, I think it’s clear now that there have been multiple global warming “hoaxes“.Â  If you have no idea what I’m leading up to, you might want to consider broadening your information sources.

I’m talking about a trove of data, code and emails acquired (“stolen,” if you prefer) last week from the influential Climate Research Unit (CRU) at the University of East Anglia in England — which for years has collated much of the data used to substantiate the danger of global warming.Â  You won’t find much about it in the mainstream news media, but here’s the email that is quickly becoming iconic in the world of global warming skepticism:

Dear Ray, Mike and Malcolm,
Once Timâ€™s got a diagram here weâ€™ll send that either later today or
first thing tomorrow.
Iâ€™ve just completed Mikeâ€™s Nature trick of adding in the real temps
to each series for the last 20 years (ie from 1981 onwards) amd from
1961 for Keithâ€™s to hide the decline. Mikeâ€™s series got the annual
land and marine values while the other two…

The “decline” in question appears to be a prediction of recent global cooling that would result from a computer model used to “calculate” long-ago global temperatures — if that model were carriedÂ  through toÂ  the current day.Â  In other words, the model has been used to establish low baselines for long-ago temperatures, to set up the case for recent global warming.Â  But if the assumptions of the model are carried through to the last few decades, for which we have actual data on global temperatures, the model says temperatures should be declining — which is inconvenient if you are trying to make the case that global warming is a serious threat.Â  So in generating data based on their model, they use the (suspicious) model data for the early years, and substitute “real temps” for recent years.

In other, other words: They cooked the books.

There’s much more than a single damning email from 10 years ago.Â  Watt’s Up With That has a relentless compilation of CRU programmer and database notes that indicate CRU personnel repeatedly falsified data when necessary to avoid inconvenient results.Â  Pajamas Media has been all over the story (unfortunatelyÂ  the functionality of their compilation page sucks), as have Taranto, Instapundit and National Review.

Soon even the MSM will be forced to take notice — the evidence is just too damning, senior Republicans are talking about congressional hearings, and the start of the UN’s long-anticipated Copenhagen climate conference is little more than a week away.

These revelations do not “settle”Â  the global warming issue — but they certainly should unsettle the so-called “consensus”.Â  Can we at least have an end to Ellen Goodman’s morally tone-deaf meme that “global-warming deniers are now on a par with Holocaust deniers”?

(Hat tip: “Global Warmists” in my title is an homage to Taranto, who told me in a private email that he came up with the term, but is not certain he was the first to do so.)

5 thoughts on ““Hide the Decline”: Global Warmists Got Some ‘Splainin’ to Do”