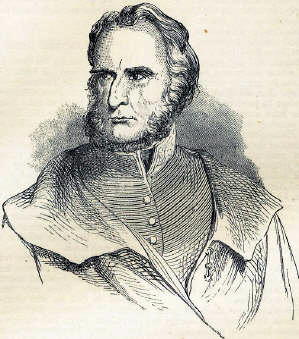 Sir Charles Napier had it right: Change the culture!

One of my favorite lesbian clerics (yes, I have more than one such favorite), the Rev. Elizabeth Kaeton, has a post on her Episcopally renowned Telling Secrets blog about an op-ed last week in which an Anglican bishop in Uganda urged passage of…

… the proposed “new” law in Uganda which calls for capitol punishment for the “crime” of what they call “aggravated homosexuality.”

Translation: Anyone who is open and honest about being an LGBT person.

Digging into the original op-ed, I find that even though the bishop in question supports the comprehensive anti-gay legislation in question, he doesn’t actually WANT to kill gay people.Â  He wants scientists to cure them.Â  I suspect this qualifies him as a liberal by Ugandan standards.

Anyway, since most of you won’t actually click the link to Mother Elizabeth’s blog (I double-dare you!), I’m taking the liberty of reprinting here the comment I posted on her blog:

Elizabeth, I agree that it’s about power. Power matters, and the culture of the power-holder matters.

Some cultures are morally superior to others. As tolerant people it makes us uncomfortable to hear that, but it’s been true for centuries.

In the 1840s, when India was a British colony and General Sir Charles Napier was its President, a group of Hindus complained to him about the prohibition of suttee — the practice of burning widows alive on their husband’s funeral pyre.

His reply? “You say that it is your custom to burn widows. Very well. We also have a custom. When men burn a woman alive, we tie a rope around their necks and we hang them. Build your funeral pyre; beside it, my carpenters will build a gallows. You may follow your custom. And then we shall follow ours.”

To stave off any tedious “Wikipedia is not authoritative” arguments, I tracked down a scholarly reference, one of many: http://www.eppc.org/publications/pubID.2636/pub_detail.asp

Yes, the British have to answer for some despicable actions over the centuries…. but they also seeded Western values around the world. Eventually those values may take hold in Uganda.

Long-time readers of All That Is Necessary may realize that this discussion has implications for Islamic Fascism.

If you’d like to argue the other side of the “resolution” in the headline, I’d love to hear from you in the comments.Â  I will be at least as civil as you are.