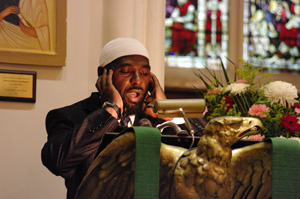 I just came from the Episcopal Cathedral in Newark, where I helped the Web Goddess record for posterity an interfaith service marking the 10th anniversary of the terrorist attacks.Â  There were solemn remembrances, of course, but also proclamations of faith and hope for the future.Â  There was even laughter, as there should be whenever human beings of whatever faith come together in community.

I was in the balcony videotaping the entire service.Â  In her role as Director of Communications and Technology for the Diocese of Newark, the Web Goddess will find a variety of uses for parts of the footage (pixelage?).Â  Her boss, the Right Reverend Mark Beckwith, Bishop of Newark, was one of three speakers, the others being a rabbi and an imam who serve with Bishop Beckwith on an interfaith coalition.

I was too busy fiddling with the video camera to take notes on the reflections of the three clerics, all of which were grounded in the knowledge that Christians, Jews and Muslims all worship the same God.Â  Newark Mayor Cory Booker attended and made brief remarks, and the Star-Ledger sent a reporter, a photographer and a videographer.Â  [The video by Nyier Abdou was particularly well done. For A.T.I.N. groupies, there’s a quick glimpse of the Web Goddess at the left at 0:24, and of me with a video camera on a tripod in the balcony at 1:04, and at 2:47.]

To me, perhaps the most moving part of the service came near the very beginning. The muezzin from a major mosque in Irvington walked to the lectern in this Episcopal church and chanted the Muslim call to worship, a hauntingly beautiful recital I had never heard in person before.

The service bulletin thoughtfully provided an English translation of the call to prayer, which begins and ends with “Allahu Akbar.”Â  Tragically, that phrase is associated in my mind with the hatred and anger of too many terrorist attacks. It was a blessing on this day to hear in those words an affirmation of our common humanity.

(Mr. Sabir Salaam of Masjid Waarith ud Deen in Irvington chants the Muslim call to prayer at Trinity & St. Philips Cathedral in Newark.Â  Photo by the Web Goddess, of course.)