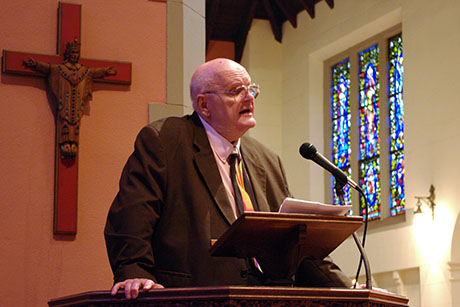 Louie Crew, the founder nearly four decades ago of a national gay-acceptance organization within the Episcopal Church, preached at my home congregation in Maplewood Sunday as part of the church’s celebration of Gay Pride Month.

Same-sex marriage has become a prominent issue in recent years, but the idea is not entirely new.Â  Crew, an emeritus professor of English at Rutgers University in Newark, told the St. George’s congregation he had solemnized his relationship with Ernest Clay in 1974, in a private ceremony based on the wedding service in the Episcopal Book of Common Prayer.

“After we married, I wrote my parents,” Crew said from the pulpit.Â  “They replied with the hardest letter I ever received.Â  They knew I was gay, that was not the problem.Â  Ernest being black was the problem.Â  They wished us all happiness, but asked me not to bring him home.Â  They hoped that I would continue to visit, but they did not want to ‘put their friends to the test,’ they said.”

Crew continued, “I showed Ernest the letter.Â  He responded with his enigmatic smile. … [Ernest said] ‘they have every right to be who they are. You could not love me had they not taught you how.'”

Over the years, Crew’s parents gradually became more comfortable with having a gay black son-in-law.Â  One day Crew’s father called and asked to speak to Ernest.

“Ernest, we’re Christians,” Crew’s father said. “But we’ve not behaved like Christians to you, and we desperately need your forgiveness.”

Crew noted that many gay people have much less redemptive stories about their families.Â  “We know full well that we did not choose our biological families, but we can, and must, choose as family those whom we respect and those who treat us with respect. That’s why St. George’s has been such a special place for at least four decades.”

Crew’s sermon continued St. George’s month-long observance of Gay Pride Month.Â  The prior Sunday, St. George’s presented a forum with the former leader of the Gay & Lesbian Alliance Against Discrimination, and the church sponsored a table at Saturday’s South Orange-Maplewood LGBT Pride Festival.Â  On June 24, a contingent from the church will march behind a St. George’s banner in the Gay Pride March in New York.