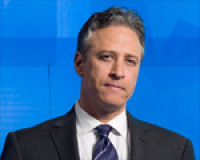 Jon Stewart of The Daily Show is a comedian who leans left, not a leftist who uses comedy.Â  He’s willing to tweak people on his own side of the aisle, which sometimes results in him drawing fire from his left.Â  Over at The Corner, Michael Potemra dissects a sanctimonious left-wing hit piece in something called The Baffler:

Furthermore, what if we donâ€™t mind laughing even about some things we agree with? Both Colbert and Stewart make fun of some of my own political views. I was thinking of saying that I like them in spite of this; it might be more accurate to say that I like them, at least in part, not in spite of this but because of it â€” because I donâ€™t want to live in a country where people canâ€™t laugh at themselves, and where everybody takes himself and his own opinions as seriously as the Baffler guy seems to.

Unlike Rush Limbaugh on the right or Michael Moore on the left, Stewart is a likeable guy.Â  There’s an Everyman quality about him, although he no doubt is in the same tax bracket as Limbaugh and Moore. He also reminds me of the business adage that you should be grateful for your competitors, because they help find the flaws in your products.