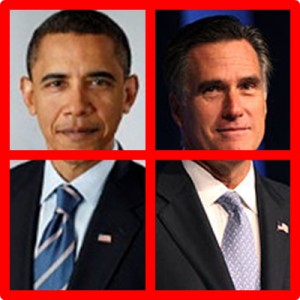 An op-ed teaser on the homepage of the Washington Post this morning promised to explain “Why the presidential campaign is so negative.” To my mind there’s a fairly simple answer — because negative campaigning works — but I clicked through to the column to see if the author could put some flesh on those bones.

Drew Westen, a psychology professor at Emory University, describes a message grid with four quadrants — the positive stories each candidate tells about himself, and the negative stories each tells about the other candidate.Â  He offers bipartisan examples of positive messages that have been successful in the past — Bill Clinton as “the man from Hope” (Arkansas) and Ronald Reagan’s famous “Morning in America” ad.Â  As a long-time PR guy, I see Westen’s grid as a useful intellectual construct, and I read on.

Until I get to this passage:

In 2008, for example, the Republican nominee, Sen. John McCain, pulled ahead of Obama for the first time at the beginning of September, in part because Obama sought to run almost entirely in one quadrant of the grid â€” telling his own story and rarely mentioning the name of his Republican predecessor, George W. Bush. Although that might seem virtuous, it would probably have seemed less so if McCain had won the election and continued many of the policies that destroyed the economy.

Gracious.Â  However fervently Professor Westen may believe that Republican policies were responsible for the financial crisis, that’s an opinion, not a fact.Â  It’s a storyline that fits squarely into one of Westen’s quadrants.Â  In another quadrant, some of us would argue that the 1977 Community Reinvestment Act played a major role in the housing crisis that damaged (not “destroyed”) the economy, by providing mortgages to a lot of people who were not financially able to pay them.Â  CRA was championed by Democrats, signed by President Carter, and tinkered with over the decades by Republicans and Democrats alike*.

By changing just a few words, Westen could easily have couched his statement as an opinion.Â  With a few more words, he could have mentioned and found fault with particular Republican policies. But by taking his partisan shot in an “everybody-knows-this” tone of voice, he lost me.Â  It’s like the friend who once started an argument, during the closing months of the second Bush presidency, with the words “now that George Bush is generally agreed to be the worst president in history…” The mind reels, and everything that follows is tainted.

As an overlay for Professor Westen’s grid, I would distinguish between “messages intended to arouse the base” and “messages intended to persuade the persuadable.”Â  To me, opinion writing is about persuasion, and on this blog I try, not always successfully, to treat opposing viewpoints with respect.Â  I was a lifelong Democrat until I became a 9/11 Republican, and I see liberalism and conservatism as two potent and worthy champions in the clash of ideas that has helped make America the most powerful and successful country in the history of the world.Â  People who treat the opposition as fools or knaves or worse need to understand that they’re not likely to change any votes that way.

Photographs from Wikipedia.Â  This post initially stated that the CRA was signed in 1997, it has been corrected above to 1977.

* A vigorous discussion about this post on Facebook has convinced me that I did not sufficiently explain my point about the CRA.Â  The 1977 law itself may have had only a very limited effect on the housing market, but it opened the door for further social engineering over the next 30 years, including a 1995 legislative change that provided penalties for banks that did not issue a sufficient volume of sub-prime loans. In the post above I linked to a 2008 blog post that traces the dots more thoroughly, at http://blog.kirkpetersen.net/2008/10/in-defense-of-wall-street-greed.html . In any event, the point of bringing up CRA at all was to establish that Westen shouldn’t say that McCain would have “continued many of the policies that destroyed the economy” in the same tone that he might say “the sky is blue.”Â  Â