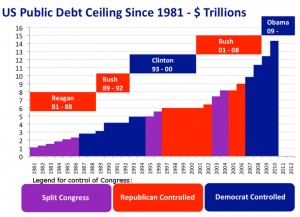 I grow weary of hearing Democrats intone that the debt ceiling — the first word of which is “debt” and the second word of which is “ceiling” — has nothing to do with the level of the debt.*  The President just said it again on TV:

Yes, raising the debt ceiling means that the government would be able to continue to pay obligations that already exist.  But it doesn’t just mean that — it also means we’ll be deeper in debt.  More debt is not the only option the government has for paying its existing obligations. Unfortunately, the alternatives are far too cumbersome to put in place by October 17, and some are arguably more harmful: raise taxes, print more money, reduce spending going forward and use those funds to service existing obligations.

I do not favor the current Tea Party strategy of tying first the continuing resolution and now the debt ceiling to the demand for defunding Obamacare.  First, as a pragmatic matter, it will not work. Second, the prospect of defaulting on Treasury bonds is scary. I examined the risks back in January, and discussed why it’s unrealistic to think the Treasury could stave off default for long by prioritizing debt payments.

A default might not be apocalyptic — damage from the 2011 credit rating reduction was tempered by the fact that everyone knew the United States still had the world’s strongest economy.  But default can’t be good, and Republicans will get the majority of the blame.

The debt ceiling law was passed in 1917, and probably should be changed.  I’m all in favor of workable mechanisms to reduce spending and indebtedness, but the debt ceiling process as it currently exists is too blunt an instrument.

The fight to reverse Obamacare can and should continue, but I expect enough Republicans will back raising the debt ceiling in time to avoid default. However, in the words of Kevin D. Williamson, “one should never underestimate the Republicans’ ability to screw up being on the right side of an issue.”

* Apologies to Maureen Dowd, whose 1998 punchline was more elegant: President Clinton, she wrote, “denies that oral sex (the second word of which is sex) is sex.”

3 thoughts on “Yes Mr. President, Raising the Debt Ceiling DOES Raise Our Debt”