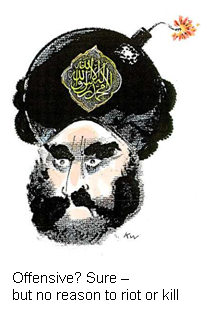 It’s not yet clear which group is behind the disciplined, well-coordinated attacks in Mumbai, but as Neo-neocon said, “it seems to involve Islamic terrorists. Thatâ€™s always a good bet, of course.” Exactly right: not a certainty, but a good bet. The obvious counter-example is Oklahoma City, but whatever demons tormented Timothy McVeigh, those same demons do not seem to afflict a vast swath of humanity. 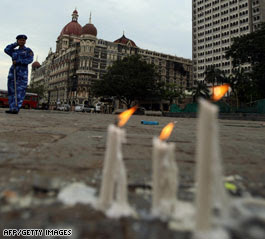 Itâ€™s missing the point to get into debates about whether this is the â€œDeccan Mujahideenâ€ or the ISI or al-Qaeda or Lashkar-e-Taiba. Thatâ€™s a reductive argument. It could be all or none of them. The ideology has been so successfully seeded around the world that nobody needs a memo from corporate HQ to act: There are so many of these subgroups and individuals that they intersect across the planet in a million different ways. … Islamic imperialists want an Islamic society, not just in Palestine and Kashmir but in the Netherlands and Britain, too. Their chances of getting it will be determined by the ideologyâ€™s advance among the general Muslim population, and the general Muslim populationâ€™s demographic advance among everybody else.

Does the problem with Islam lie in the religion or in the culture? Do the various pathologies found in large parts of the Islamic world — from terrorism and murder of innocents to female “circumcision” and the oppression of women — have a basis in the Quâ€™ran, or do they come from the Arab culture into which Islam was born?

If we refuse to use the term Islamic terrorist, we conveniently take away any onus of responsibility for Islamic groups to halt the murderous ideology they propagate. In fact, in nearly EVERY claim of responsibility, which I studied, for hundreds of violent Islamic attacks which took place since 9/11, the common justification by the Muslim terrorist perpetrator was that there was a â€œwar against Muslimsâ€ by the West and the Jews that had to be avenged. The real truth is that there is war against the West and the Jews by Islamic jihadists. And no amount of territorial withdrawal or peace negotiations will assuage them.

15 thoughts on “What’s the Matter With Islam?”