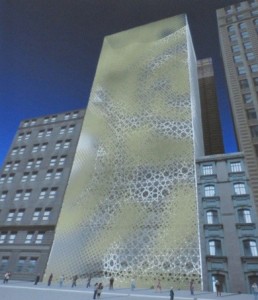 One of the first thoughts that occurred to me when I began writing about the planned 13-story, 100,000 square foot, $100 million Islamic center near Ground Zero is, “surely this would be the biggest Islamic facility in the country?” To me, the trophy-building scale of the project is what makes it objectionable at that site.

But despite the zillions of words that have been written about the controversy, and despite the time-honored journalistic tendency to identify the biggest this and the tallest that, I’ve looked in vain for anything providing that bit of context.

It turns out that such comparisons are not easily made.Â  But after surveying the competition, I believe that if it is built, Park51 arguably will be the largest and tallest, and certainly will be the most expensive, Islamic center in North America. 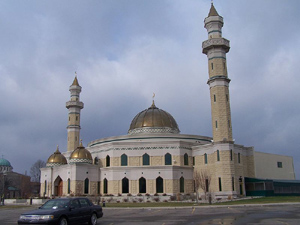 If you Google “largest mosque in America,” the first result is the Islamic Center of America, which according to its website is a 70,000-square-foot complex in Dearborn, Michigan.Â  It includes a mosque that will accommodate 1,000 worshipers at a time (700 men downstairs, 300 women upstairs, just to remind you who is considered important), as well as a full-service banquet facility and a school.Â  This represents the first two of four planned phases of construction, with an auditorium and more educational facilities still to come.Â  “When all four phases are complete, the Islamic Center of America will be the largest in North America,” the website says.

The website gives the cost of the mosque as $14 million.Â  It’s not clear whether that is the final cost or just the phases built so far, but in either event it clearly won’t approach the $100 million pricetag of Park 51.Â  The dome in Dearborn is listed as 150 feet high, and the two minarets are said to be “10 stories tall”.Â  I’ve not been able to find a height for Park51 expressed in feet, but 13 stories implies about 150-160 feet. 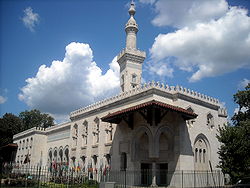 The Islamic Center of Washington, where George Bush removed his shoes on September 17, 2001, and declared that “Islam is peace,” was opened in 1957, and I could not find any estimates of its cost or square footage.Â Â  A Washington Post article refers to the “distinctive 160-foot minaret,” but the main building is only 2 or 3 stories tall. 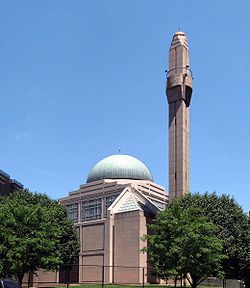 The current largest Islamic facility in New York is the Islamic Cultural Center of New York, at 3rd Avenue and 97th Street in Manhattan, eight miles uptown from Ground Zero.Â  The Imam there on 9/11, Muhammad Gemeaha, opined that “only the Jews” were capable of destroying the World Trade Center and added that ”if it became known to the American people, they would have done to Jews what Hitler did.”Â  Charming.Â  To be fair, the current imam, Mohammad Shamsi Ali, apparently is working hard to build stronger ties with the city’s Jewish community.

The center boasts a 130-foot minaret, and was opened in 1991 at a cost of $17 million.Â  Based on the Bureau of Labor Statistics inflation calculator, that cost translates to about $27 million in today’s dollars.Â  In light of the concerns about foreign funding of Park51, it’s interesting to note that the Islamic Cultural Center of New York “depended on support from 46 Islamic countries,” primarily Kuwait. 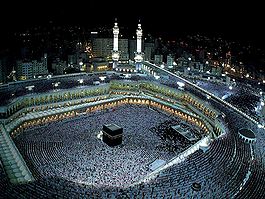 The biggest mosque in the world, of course, is the one toward which Muslims face for their daily prayers:Â  Masjid al-Haram, the Grand Mosque of Mecca, which dates from 638.Â  No info on cost, but the Saudis have clearly sunk some bucks in it over the years.Â  It will accommodate up to 4 million worshipers during the annual hajj.

(All photos from Wikipedia)