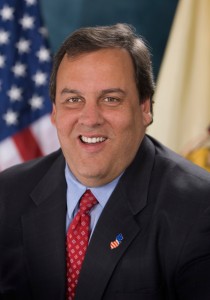 The Web Goddess, who reads the left-leaning Salon so that I don’t have to, today flagged a very astute and even-handed article on the political dilemma that same-sex marriage poses for New Jersey Gov. Chris Christie.

I argued earlier this week that although Christie will veto the marriage equality bill if it reaches his desk, the governor is fighting a losing battle.Â  The arc of the moral universe is long, but it bends toward justice.Â  As of this week seven states permit same-sex marriage.Â  New Jersey will not become the eighth, but I fully expect it to be in the front half of the parade, despite Christie’s efforts.

There are two elections on the horizon that Chris Christie has a particular interest in. The first is in New Jersey next year, when heâ€™ll seek a second term as governor. The second is in 2016, when heâ€™ll make a logical presidential candidate â€” if he wins reelection in â€™13 and if the Republican nomination is open. (For now, at least, letâ€™s leave aside the idea that Christie might serve as his partyâ€™s vice presidential candidate this year.)

This makes the debate over gay marriage in the Garden State, where the Democratic-controlled Senate approved marriage equality legislation yesterday, a problem for him.

On the one hand, support for gay marriage among New Jersey voters is solid…Â  Christie has to be very careful as he approaches his reelection race. He doesnâ€™t have much margin for error when it comes to alienating swing voters â€” one of the reasons he was so colorful and adamant in denying interest in the presidential race last year â€” and swing voters in New Jersey are generally fine with gay marriage.

But Republican voters nationally are not, and it will be a long time before they are (if they ever are). So if he wants to preserve his viability for â€™16, Christie cannot be known as the New Jersey governor who enacted same-sex marriage. But he also canâ€™t position himself as a hard-line, stop-at-nothing-to-derail-it opponent of it; to do so would reek of the cultural conservatism that has made most national Republicans unmarketable in New Jersey and endanger Christieâ€™s reelection prospects. And if he gets the boot in â€™13, it could sink whatever â€™16 ambitions he has.

In the 2009 gubernatorial election, Christie did campaign “as a hard-line, stop-at-nothing-to-derail-it opponent” of marriage equality.Â  He went beyond merely promising to veto it — he promised to support a state constitutional amendment banning it.Â  You won’t hear The Great Man repeating that promise.Â  The legislature may or may not be able to overcome a veto in the current session (which lasts until January 2014), but there is zero chance that a constitutional amendment would pass in New Jersey.

I want to be careful here — I am not criticizing Christie for having moderated his stance on same-sex marriage.Â  I think it’s a move in the right direction.Â  I have no doubt that Christie honestly believes that marriage should be reserved for the union of one man and one woman. I disagree with his position, but holding that position does not make him evil.Â  Don’t forget, that’s precisely the position Barack Obama articulated just days before the 2008 election.Â  The most important difference between Obama’s pre-election stance and Christie’s is that Obama opposed tinkering with state constitutions.

Christie has every right to modulate his level of aggressiveness in supporting one-man-one-woman.Â  He’s promised to veto the current bill, and he has to go through with that.Â  But as Kornacki writes, the best thing that could happen to Christie in terms of his future political ambitions would be for marriage equality to become the law of the land in New Jersey without his fingerprints on it.Â  If it begins to look possible that the legislature could override a veto, look for only token arm-twisting by Christie.