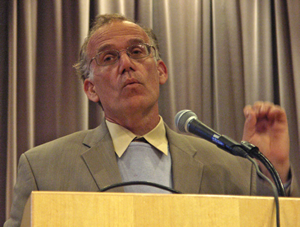 When I grow up I want to be Victor Davis Hanson.  (Turns out he’s not quite five years older than me.  Note to self: Next time start earlier.)

I first became aware of VDH in the weeks and months after September 11.  Like many people, I was hungry not just for information, but for perspective.  I was less interested in the fluctuating body count than in what the future would hold.  While milling about in Citigroup’s corporate offices in midtown that awful Tuesday afternoon, wondering how to get home with the subways and trains locked down, I fell into conversation with a much-younger co-worker, who said something along the lines of, “maybe things will all get back to normal soon.”  I shook my head.  “The world changed today,” I said.

That was about the extent of my insight on Day One.  For what it’s worth, I think it’s held up pretty well.

Here’s a sample of VDH’s insight on Day One:

[O]n December 7, 1941, we declared war against the Japanese Empire after twenty-four hundred American sailors were surprised and killed on a Sunday morning at Pearl Harbor….

Today, September 11, the United States was similarly attacked, in acts every bit as cowardly and without warning.  The only difference between Pearl Harbor and the firing on the Pentagon and destruction of the towers of the World Trade Center is one of magnitude.  Ours now is the far greater loss.  No enemy in our past, neither Nazi Germany nor imperial Japan, has killed so many American civilians and brought such deadly carnage to our shores as these suicidal hijackers who crashed the very citadels of American cultural, economic, and military power in our nation’s two greatest cities. … Surely, by any fair measure of history, we should be at war now.

But are we and shall we be? This generation of Americans is at a crossroads in our nation’s history.  We must decide whether we shall continue to be the adolescent nation that fretted the last six months over the risque details of Congressman Condit’s private life while our enemies were plotting death on the scale of a Guadalcanal or Tet under our very noses.  Or are we still the children of our fathers, who accepted the old, sad truth that “the essence of war is violence, and moderation in war is imbecility.”

As you read those words now, they may seem unremarkable — nothing that you haven’t read dozens of times.  But those sentiments, part of a carefully fleshed-out essay of 1,000 words, spun forth from Hanson’s computer on September 11.

Between then and the end of 2001, VDH wrote 38 (!!) similarly thoughtful essays, published at National Review Online and elsewhere.  The essays are collected in An Autumn of War, a book available through the Amazon widget in the right column of my homepage.  More than a decade later, the essays are still worth reading, and if you order the book through my Amazon widget, supposedly I’ll get a tiny little piece of the action.  I really wish someone would do this someday so I can see if I really get a commission.  Just a thought.

Where was I?  Ah, I was making the point that VDH has a talent for producing insightful analysis in real time.  His output at National Review Online and what used to be called Pajamas Media is prodigious.  I don’t always agree with him — his criticisms of Obama sometimes seem fueled by an intense dislike that I do not share.

But he’s always worth reading, and today he’s done the best job I’ve ever seen of describing how much is at stake in Iran’s pursuit of nuclear weapons.  (That’s right, the 600 words above are all for the purpose of setting up a blog post of the “here’s something interesting I read today” variety.  Maybe someday I’ll figure out how blogs are supposed to work.)

Onward! There are so many insights in today’s essay that it’s hard to decide what to excerpt.  But that’s the kind of choice that I as a professional blogger have to make every day.  Or once or twice a week in my case.

Otherwise insignificant nations and failed states gain credibility by shorting their own people to divert billions of dollars to acquiring a bomb. Take away that fact from Pakistan, and the United States would probably have reduced aid to such a de facto belligerent long ago. …

[I]f a head of state can feign insanity, or, better yet, convincingly announce a wish for the apocalypse, then he can, in theory, circumvent some traditional rules of deterrence. An Iranian theocrat’s supposed willingness to use his sole nuclear weapon to wipe out tiny Israel — at the cost of losing 30 million Iranians from retaliation — yields a cheap way to obtain not just parity with Israel, but potentially a nuclear advantage. …

To this day, we do not know whether North Korea has successfully detonated a nuclear bomb that is easily deliverable. But it does not matter; we need to know only that it has achieved some sort of nuclear reaction that suggests the ability to repeat it a few times. That fact prevents any sort of preemptive attack on a North Korean reactor, giving North Korea the sort of exemption that Iraq, Libya, and Syria never quite achieved. …

The reason why Germany, Japan, South Korea, and Taiwan are not nuclear is not a matter of technology or finance; indeed, all four could this year alone create nukes as they do BMWs or Hondas. It is not just an American nuclear umbrella but rather a large American nuclear umbrella that assures such countries that they can rest secure without their own deterrent stockpiles. …

The danger is not the bomb per se, but rather who has it. Most of us do not worry about a democratic Britain, France, India, or Israel possessing nuclear weapons. The fright instead is over a Communist authoritarian China, an unhinged North Korea, an Islamist Pakistan, or an unstable Russia having nuclear weapons. Transparent democracies, in other words, are mostly reliable nuclear guardians; non-transparent autocracies are less so.