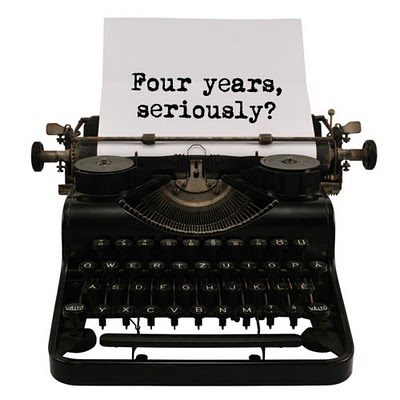 July 5 was the fourth anniversary of my first substantive blog post,Â  “I Prefer the Chicago Politician to the Obamessiah“, wherein I rejected the then-current delusion that Senator Obama was “not a politician.” It began:

We know now, of course, that he will never be an important senator, but otherwise I think the post holds up fairly well.

I blew past another milestone last week without knowing it. My WordPress dashboard tells me that my 500th blog post was on July 1, titled “Who Wins? Q&A on the Obamacare Ruling“.Â  If I’d known what an auspicious occasion that blog post was, I would have… I dunno.Â  I guess I would have mentioned it.

Why do I blog?Â  Primarily for the money, of course. Since August 2011, I’ve been a professional blogger. I’m not supposed to talk too much about my top-secret relationship with Google AdSense, but I think I can tell you that I’m nearly half-way to my second $100 payout.Â  Ca-CHING!Â  (I’m also not supposed to generate traffic artificially by asking for it, and nothing herein should be construed as a request for clicks. But take a moment to look at the ads at the top, the sidebar and the bottom.Â  Do you see anything interesting?Â  I’m just askin’.)

My modest blogging income reflects my modest traffic.Â  A majority of it comes via Facebook, where I link to every new post.Â  Still, I get search-engine visitors from all over the world, and they add up after a while.Â  My Flag Counter widget in the right column currently shows more than 45,000 total visitors from the United States, and if you click through to it you’ll see I’ve had nearly 59,000 unique visitors from 158 countries.Â  As a church secretary in suburban New Jersey, I think that’s kinda cool.

If you Google my name, my blog is now the first result.Â  This is progress!Â  Three years ago, when I wrote about the six other Kirk Petersens in America, the guy who had registered kirkpetersen.com before I could was the first result.

The bottom line is that I blog because I like to write, and I think I do it reasonably well.Â  I haven’t ever had the fire-in-the-belly, compulsive need to write on a daily basis — the drive and determination that produces lots of bad first novels, and a few good ones.Â  I also don’t have the solitary self-discipline to support myself as a freelance writer — a lifestyle that my pal Lori Widmer chronicles inspirationally on a daily basis at Words on the Page.Â  I thrive in a corporate communications or agency environment where I can be part of a team, and if the economy ever improves I hope to have such a job again.Â  In the meantime, my blog gives me a forum to write whenever I feel I have something to say, and there’s no consequence (other than vague, self-induced guilt) if a couple of weeks go by between posts.

The real ego boost comes when someone tells me that something I’ve written has prompted them to reconsider a topic.Â  As an “out” Republican in a deep-blue enclave in a blue state, this often comes in the context of disagreement.Â  More than one liberal friend has said something along the lines of “you’re my favorite Republican.”

That resonates for me as an affirmation of my belief in the importance of civil discourse.Â  I was a lifelong Democrat before I became a 9/11 Republican, so I’ve lived on both sides of the Great Divide in American politics.Â  Each side is populated by similar distributions of thoughtful people and jerks.Â  The clash of ideas between liberalism and conservatism is part of what makes this a great country, but I try to let the ideas clash while treating the people on the other side with respect.Â  I find people are more willing to consider my point of view if I refrain from ridiculing them.Â  Who knew?

4 thoughts on “Fourth Blogiversary Prompts Reflections on Why I Blog”