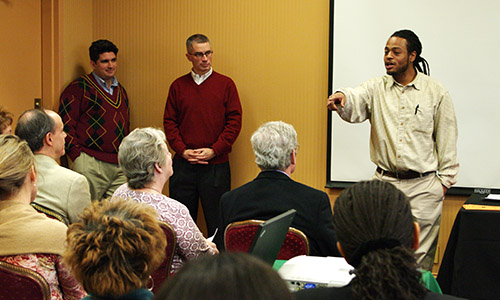 Alvin Valentine describes his criminal past, as Evan Misshula and Jim McGreevey look on. Photo by Nina Nicholson.

Now that the Web Goddess is the head of communications for the Episcopal Diocese of Newark, I’ve been writing occasional articles for diocesan publications.Â  Recently I had the opportunity at a diocesan event to cover former NJ Gov. Jim McGreevey and two ex-cons as they discussed Exodus Transitional Community, which helps formerly incarcerated people makeÂ  a transition back into society.Â  An excerpt:

McGreevey is a member of the Newark Dioceseâ€™s Prison Ministry, and became involved with Exodus as part of his field education at General Theological Seminary, where he is seeking a Master of Divinity degree.

More statistics: 730,000 people walk out of prison every year.Â  One third of them will be back in jail in a year; two-thirds of them will be back in three years.Â  The prison system â€œengenders complete dependency as a means of satiating or controlling prisoners,â€ McGreevey said, and then spills them out into the job market with atrophied social skills and â€œthe scarlet letter of a previous felony conviction.â€Â  The current re-entry program, â€œsuch as it is, is a complete and utter failure.â€

I wasn’t blogging when McGreevey resigned in 2004, but if I had been, I would have had harsh words for his conduct.Â  Now I applaud him for this work.Â  Surely it’s in society’s best interest to improve the job prospects of people emerging from prison.