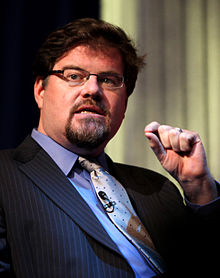 Jonah Goldberg is the writer I want to be if I grow up. (Since I’m a decade older than Goldberg, I guess I should have started earlier.)

Literally tens of people read this blog every day.Â  Goldberg, OTOH, has tens of bazillions of readers at National Review Online and elsewhere, and his first book, Liberal Fascism, was a No. 1 bestseller.Â  How did my first book do?Â  I’ll get back to you on that.Â  (Note to self: write a book.)

I bought Liberal Fascism despite the tendentious title, expecting humorous insights.Â  I found it more dry and scholarly than I expected.Â  (If you’d like to buy a copy based on that ringing endorsement, please do so through my Amazon widget in the column at right.)

Goldberg’s next book, due out in a few days, seems likely to be more fun, although the slightly less provocative title might keep a damper on sales. The book is Tyranny of Cliches: How Liberals Cheat in the War of Ideas, and if you’d like to purchase a copy, I recommend using my widget.Â  (Hey, did you know that if you go to Amazon via my widget, I’ll supposedly get a sliver of revenue from whatever you purchase in that browser session?)

Goldberg’s blog for the book offers a link to the introduction, where this passage caught my fancy:

Thereâ€™s a kind of argument-that-isnâ€™t-an-argument that vexes me. I first started to notice it on university campuses. Iâ€™ve spoken to a lot of college audiences. Often, I will encounter an earnest student, much more serious looking than the typical hippie with open-toed shoes and a closed mind. During the Q&A session after my speech he will say something like â€œMr. Goldberg, I may disagree with what you have to say, but I will defend to the death your right to say it.â€

Then he will sit down, and the audience will applaud. Faculty will nod proudly at this wiser-than-his-years hatchling under their wings. What a glorious moment for everybody. Blessed are the bridge builders.

My response? Who gives a ratâ€™s ass?

First of all, my right to speak never was in doubt. Indeed, Iâ€™m usually paid to speak. Besides, Iâ€™ve given my speech already and weâ€™re in Q&A time: Shouldnâ€™t you have told me this beforehand? Second, the kid is almost surely lying. Heâ€™ll take a bullet for me? Really?

ClichÃ©s like these are a way to earn bravery on the cheap, defending principles you havenâ€™t thought through or perhaps only vaguely support. Or, heck, maybe he really would leap on a grenade so I could finish talking about how stupid high-speed rail is. But it still doesnâ€™t matter, because mouthing these sorts of clichÃ©s is a way to avoid arguments, not make them.

As I have in the past, I experienced a little frisson of kinship with Goldberg.Â  I’ve always been annoyed by the phony sincerity of the “defend to the death” line.Â  Here’s my take on it from three years ago:

Thereâ€™s an old platitude, â€œI may not agree with what you say, but I would defend to the death your right to say it.â€Â  That rings slightly false â€” although I would verbally defend your right to disagree with me, if thereâ€™s a realistic prospect of death, youâ€™re probably on your own. But surely all of us would be better off if more people treated opposing ideas with some level of respect.

No, I don’t think Goldberg got the idea from me, I just think it’s kind of cool that by being a blogger, I can go back and look up stuff I wrote in the past, and brag about having an idea first.