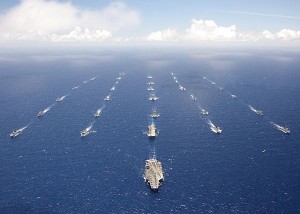 No matter how far Left someone is, or how anti-war, or even anti-American, I think we all could agree that one should not publish the sailing time of troop ships during a war.Â  A no-brainer, right?Â  But what if the publisher is the U.S. Navy itself?

It happens all the time.Â  Case in point, the photo accompanying this blog post (if you’re reading this on RSS, click through to the damn blog to see the photo.Â  And while you’re there, would it kill ya to actually click on a friggin’ ad once in a while?Â  I’m just sayin’.)

Onward!Â  “Sailing time of troop ships” is kind of an archaic phrase — modern ships don’t “sail,” and there is no longer a class of ships OFFICIALLY referred to as “troop ships.” But those are quibbles, and modern equivalents exist.Â  If you ever find yourself in possession of the knowledge that your government is about to launch a daring nighttime raid to take down Public Enemy No. 1 inside the borders of a semi-hostile ally… just to pick a wild hypothetical… if you ever have that knowledge, in the name of sweet Jesus or Loki or whoever, DON’T TWEET ABOUT IT IN ADVANCE!

Where was I?Â  The photo.Â  Below in its entirety is the caption that the U.S. Navy wrote, within the past week, describing the location of thousands of U.S. and allied sailors right now, through the day after tomorrow:

120727-N-VD564-015 PACIFIC OCEAN (July 27, 2012) Ships and submarines participating in Rim of the Pacific (RIMPAC) exercise 2012 are in formation in the waters around the Hawaiian islands. Twenty-two nations, more than 40 ships and submarines, more than 200 aircraft and 25,000 personnel are participating in the biennial Rim of the Pacific (RIMPAC) exercise from June 29 to Aug. 3, in and around the Hawaiian Islands. The world’s largest international maritime exercise, RIMPAC provides a unique training opportunity that helps participants foster and sustain the cooperative relationships that are critical to ensuring the safety of sea lanes and security on the world’s oceans. RIMPAC 2012 is the 23rd exercise in the series that began in 1971. (U.S. Navy photo by Chief Mass Communication Specialist Keith Devinney/Released)

Who told the enemy about RIMPAC?Â  String ’em up! (Cue the visual of Jon Stewart touching his ear and pretending the control booth is setting him straight.)

My point, and I do have one, is not to make fun of Op-Sec rules.Â  One of those thousands of sailors is my son, and I’d be savagely pissed off if someone disclosed his whereabouts in a way that endangered him.Â  My point is the danger of “zero-tolerance” laws.

“Zero-tolerance” would mean that I’d be in trouble for this blog post even though the Navy itself provided the potentially most dangerous information.Â  But now I’ve increased that miniscule danger by a a hyper-miniscule amount by mentioning my son.

Think I’m kidding?Â  Note that the Navy did not disclose the names of any of the ships in the exercise.Â  But you can glance at my blog and learn my son is on the Nimitz.Â  The Nimitz is that big boat in the foreground of the picture, unless there’s another aircraft carrier at RIMPAC.Â  My son’s a second-class Aviation Boatswain’s Mate, which is one of three ratings responsible for launching and recovering fighter jets in the Arabian Sea and other war zones, and his two tours thus far have taken him to exotic places including Japan and …

Still think I’m kidding?Â  Ask the loved ones of ChiefÂ Mass Communication Specialist Keith Devinney how comfortable they are with that caption. There’s nothing in my prior paragraph that hasn’t ALREADY been on my blog, and even if the blog never existed, there’s nothing dangerous in the graf that Osama bin-Soggy couldn’t piece together with very modest effort.Â  But if any jerk of a prosecutor ever wants an excuse to make my life a living hell, that paragraph could provide it.Â  I’d be scared to publish it if not for the fact that my life is a target-rich environment.

3 thoughts on “RIMPAC! Or, Here’s Why It’s Dangerous Even to JOKE About Yelling “Fire” in a Crowded Theater”