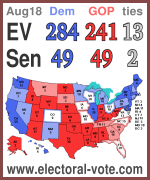 This is a static snapshot of today - the version in the side column will be updated dynamically.

It’s time once again to launch Electoral-Vote.com’s tracking widget — almost exactly four years to the day after it made its first appearance on my humble blog.

For better or worse, we don’t have national elections in America. We have 51 state elections.Â  Occasionally this matters a lot — just ask President Gore about his half-million-vote “national victory” in 2000.

It takes 270 electoral votes to win, so if the election were held today, polls indicate Obama would win with 284 electoral votes (plus or minus 13, depending on Virginia, which currently is deadlocked). Looks like the Senate would be deadlocked at 49-49, with two seats too close to call.

But the races can be volatile.Â  Four years ago this week, the same widget predicted 275 EV for Obama, 250 for McCain.Â  On Election Day, Obama actually won 365 electoral votes, more than twice McCain’s total of 173.

This year on Nov. 6, the Web Goddess and I will cast presidential votes that are utterly meaningless — not just because we’ll cancel each other out, but also because there is zero chance that Romney will carry New Jersey. The states that matter most this year areÂ Colorado, Florida, Iowa, Missouri, North Carolina, Ohio, Virginia and Wisconsin.

As near as I can tell, every poll ever taken on the subject shows that an overwhelming majority of Americans think the Electoral College should be eliminated in favor of direct national elections.Â  But don’t look for a Constitutional amendment any time soon — the amendment process is even more strongly skewed in favor of smaller states than the Electoral College itself.

A non-profit called National Popular Vote Inc. has been pushing a proposal that would technically retain the Electoral College, even while rendering it irrelevant.Â  From their homepage:

The National Popular Vote bill would guarantee the Presidency to the candidate who receives the most popular votes in the entire United States. The bill preserves the Electoral College, while ensuring that every vote in every state will matter in every presidential election. The National Popular Vote law has been enacted by states possessing 132 electoral votes â€” 49% of the 270 electoral votes needed to activate it.

Interestingly, the big state vs. small state struggle doesn’t seem to come into play.Â  Jurisdictions that have passed the NPV bill range from the smallest of the small — Vermont and District of Columbia, with three electoral votes each — to California, the biggest jackpot, with 55 electoral votes.

No, the divide that matters is on red-blue lines.Â  The other states that have enacted the bill include New Jersey (which managed to enact it in 2008 without me noticing), Hawaii, Illinois, Maryland, Massachusetts and Washington.Â  Every single one of these states has gone to the Democratic candidate in each of the past five presidential elections, going back to 1992.

Maybe the red-blue split has something to do with the fact that the only election in living memory that would have gone the other way in the absence of the Electoral College is Bush vs. Gore in 2000.Â  The last time before that was Harrison vs. Cleveland in 1888.

One thought on “What National Election? Electoral College Is the Only Tally That Counts”