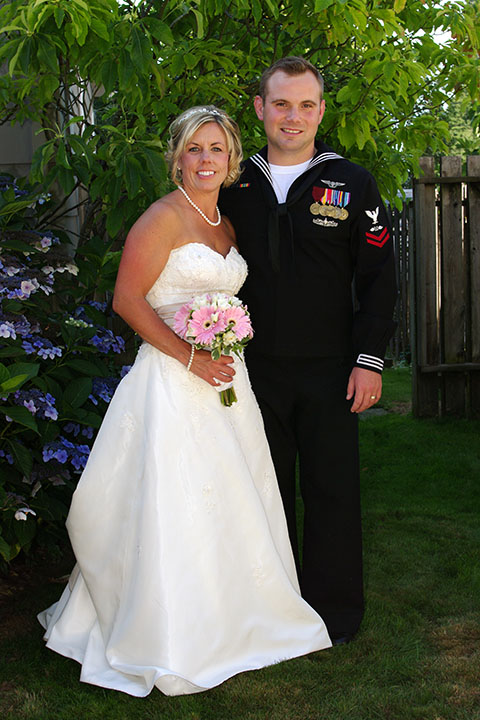 On a brilliant sunny Saturday afternoon in Bremerton, across Puget Sound from Seattle, a handsome Navy petty officer and a lovely schoolteacher pledged to love and honor each other forevermore, as they became husband and wife.

The Web Goddess and I were among the witnesses to the back-yard nuptials, and while my wife was taking the photos accompanying this post, I was wiping away happy tears as I saw and felt the love radiating from my son and his bride.

The groom is Aviation Boatswain’s Mate Second Class Harry Kirk Petersen — whom I once dubbed “Sarge” in a post explaining his rating and rank. Â  The bride, now known as Diana Padgett Petersen, teaches seventh-grade English and coaches high school swimming in the Bremerton public schools.Â  Her nine-year-old son Gavin, who plays soccer and baseball and is thrilled with his new step-father, wore multiple hats as ring bearer, best man and bride’s attendant. 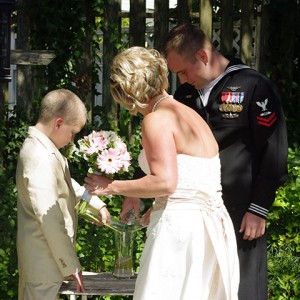 The happy couple met 18 months ago in a local tavern, where she had gone with friends for line-dancing lessons and he had gone with Navy buddies to shoot pool.Â  While Harry watched a foursome of his mates play eight-ball, he was asked to fill in as a dancing partner, and a serendipitous spark was lit.

Harry soon left on a six-month deployment, as sailors do, and the couple kept in touch daily by email, and by phone whenever he was in port.Â  When the Nimitz returned from the Indian Ocean, Harry and Diana soon started talking about the long term.

Harry has more than 18 months left on his enlistment, which probably means one more long deployment starting early next year.Â  “Sarge” and his new family will weather the hardship of separation the way military families have done for centuries — with a sense of duty and a fierce hunger for reunion.

Diana and Gavin, the Web Goddess and I are honored to know you and thrilled to welcome you to our extended family.Â  Harry, we’re proud of you and love you, and think you made a wonderful match.Â  Thank you for your service, and may you have fair winds and following seas. 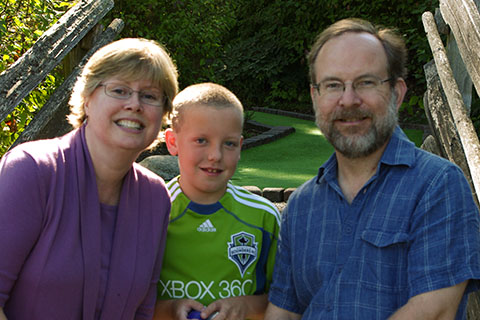 The day before the wedding, the Web Goddess and your humble scribe take a break from mini-golf with our soon-to-be step-grandson, Gavin.Â (Photo by Harry Petersen) 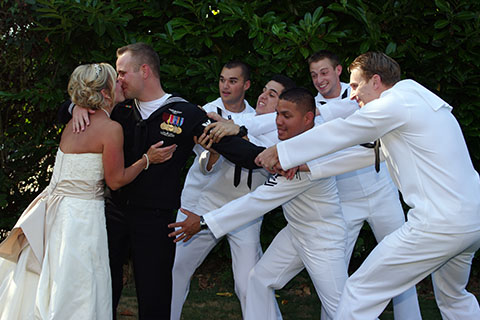 Harry's Navy buddies try to rescue him from his marital future. In this tug-of-war, the smart money is on the five-foot-two gal in the pretty dress.

(Photos by the Web Goddess, except as noted)

2 thoughts on ““Sarge” Got Married — Now the Web Goddess and I Are Step-Grandparents!”