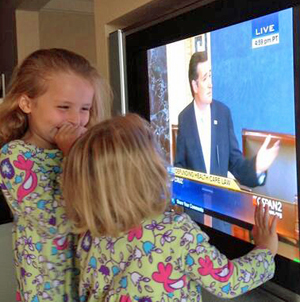 “Politics is the art of the possible.”
— Otto von Bismarck

Part of me wants to admire Ted Cruz.

If you believe, as I do, that the current welfare state is unsustainable and Obamacare will make it worse, it follows that at some point there will be a wrenching readjustment.Â  When that readjustment occurs, we will wish it had happened earlier, when the problem was more manageable.Â  Cruz and his confederates are trying to make it happen now.

Besides, it’s about time somebody read “Green Eggs & Ham” on the floor of the Senate.

But Cruz doesn’t make himself easy to like.Â  Surely no other senator has ever become so unpopular among his own party in just nine months in office.Â  Rep. Peter King described his fellow Republican as “a fraud.”Â  Sen. John McCain reportedly “hates” the man.Â  Sen. Bob Corker suggested Cruz is “confused” and, channeling Bismarck. Sen. Tom Coburn said:

â€œTactics and strategies ought to be based on what the real world is, and we do not have the political power to do this.â€

Cruz has created what right-leaning columnist Kathleen Parker (or her headline writer) describes as “the GOP’s lose-lose proposition“:

Hereâ€™s the problem for Republicans, which will not be news to those with a view of the long game. The short game is to stall Obamacare, but to what end ultimately? Until Republicans can seize the Senate in 2014 and the White House in 2016, at which point they can repeal the whole thing?

More likely, whether the government shuts down or, should Tinker Bell suddenly materialize and persuade Obama to cave and postpone his personal dream act, Republicans will be viewed by a greater majority than previously as having no talent for leadership.

Democrats own Obamacare — they passed it without a single Republican vote, in a series of shady maneuvers and dead-of-night debates, against the clearly expressed will of the American public.Â  People are supposed to be able to start purchasing health care coverage on the exchanges on Tuesday — good luck with that — and the costs and shortcomings of Obamacare will become more apparent as the rollout lurches along.Â  This is the very time when the GOP should heed Paul Begala’s advice: “Never interrupt your opponent when he is destroying himself.”Â  But Cruz & Co. are about to change the subject with a costly government shutdown that will accomplish nothing.

Former Rep. Artur Davis, a Democrat-turned-Republican, said just now on CNN (I’m paraphrasing): Republicans win the argument over the substance of Obamacare, but we’re going to lose on the brinksmanship.