I’m always reluctant to accuse a politician of lying. Far too often, disagreements about facts morph into accusations of “lies” by political opponents.

Take the ludicrous but widespread notion that President George W. Bush “lied” about Saddam Hussein having weapons of mass destruction. Never mind that the intelligence agencies of major Western powers, including war opponents like Germany and France, believed Saddam had WMD.Â  Never mind that the Clinton administration and prominent Democrats with access to intelligence reports thought Saddam had WMD. Never mind that it is an established fact, about which there is no controversy, that Saddam actually used WMD, in the form of chemical weapons, in the Iran-Iraq war and against his own people in the Kurdistan region.Â  Never mind that it would make no sense for a president to lie about something momentous, knowing that the lie will be discovered.

Never mind all that — it doesn’t even rhyme.Â  It’s much easier for opponents of the war to put their fingers in their ears and chant, “Bush lied, thousands died.” 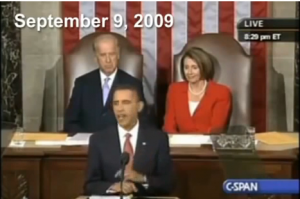 All of this comes to mind as various voices on the Right, including some I highly respect, are ratcheting up their accusations that President Obama “lied” when he promised, “if you like your health insurance plan, you can keep it.”

He made this promise again and again in the campaign to sell Obamacare to a skeptical public, as you can see in the video above.Â  My favorite bit is from the president’s September 9, 2009 speech to a joint session of Congress, starting at the 56-second mark:

Nothing in this plan will require you or your employer to change the coverage or the doctor that you have. Let me repeat this: Nothing in our plan requires you to change what you have.

That’s simply not true, of course.Â  There was never any hope that it would be true.Â  Obamacare sets minimum standards for coverage, and any plans that don’t meet those standards have to be changed or discontinued.Â  CBS News, not exactly a hotbed of anti-Obama sentiment, reports that more than 2 million Americans have had policies canceled for this reason.

The White House is on the defensive, trying to explain how, when the president repeatedly said this: “If you like your doctor or health care plan, you can keep it” — he really didn’t mean it.

I’ve always been convinced that President Bush may be guilty of believing what he wanted to believe about WMD in Iraq — but there’s no doubt that he believed it. You can agree or disagree, of course — I presented my evidence above.Â  I’ll be looking to see if evidence emerges that Obama somehow, against all logic, believed what he said about Obamacare.

2 thoughts on “Did the President “Lie” About Obamacare, or Did He Believe What He Wanted to Believe?”