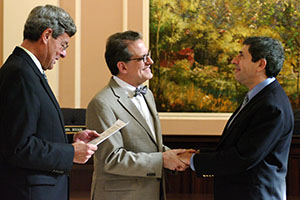 After 37 years as a committed couple, Ulysses Dietz and Gary Berger were married this afternoon by Mayor Victor De Luca at Maplewood Town Hall, as New Jersey becomes the 14th state to permit gay people to marry. The Web Goddess and I were thrilled to be in attendance, along with other friends of the happy couple who were able to get time away from work on short notice.

Also today, Gov. Chris Christie conceded defeat in his opposition to marriage equality, after a unanimous state Supreme Court decision lifting a lower-court stay, which touched off wedding bells around the state.

One of the cool things about blogging is the occasional opportunity to say “I told you so,” and back it up with a link. In a February 2012 post headlined “The Sooner Christie Loses on Same-Sex Marriage, the Better Off Heâ€™ll Be,” I wrote:

The arc of the moral universe is long, but it bends toward justice.Â  As of this week seven states permit same-sex marriage.Â  New Jersey will not become the eighth, but I fully expect it to be in the front half of the parade, despite Christieâ€™s efforts.

When I predicted Christie would be better off by losing, I was looking ahead 18 months to when he would stand for re-election.Â  Election Day now is little more than two weeks away, and his re-election is not in doubt.Â  A liberal friend predicted before the wedding this afternoon that if Christie runs for president in 2016, the Right will savage him for dropping his appeal before the court could eventually rule on the appeal itself.

I don’t see it that way — the Right has bigger quarrels with Christie than marriage equality.Â  By dropping a clearly hopeless cause, Christie demonstrates he is more pragmatic than Ted Cruz.Â  That’s admittedly a low hurdle, but it does represent an “evolution” in Christie’s approach to the issue.Â  Four years ago I voted for Jon Corzine, the badly-tarnished Democratic incumbent, solely on the basis of Christie’s announced support for a constitutional amendment banning same-sex marriage.

Thirty-six states to go.Â  They’ll go one by one for a while, but eventually I expect the U.S. Supreme Court to be asked to rule on some state’s refusal to honor a same-sex marriage performed in another state — by which time the lack of damage to the institution of marriage will be well established.

If it happens that way, I’ll have another I-told-you-so post to write.Â  In the meantime, congratulations to Gary and Ulysses, and to all our other friends who are marrying or planning weddings on this happy day.