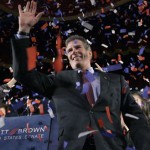 ï»¿Don’t buy into the hype about terrible trouble for the Democrats. Some trouble, maybe. The mainstream media (MSM) is working overtime to rip into Obama like a pack of famished guppies. They want to see him dunked in the political pool and come out gasping and choking — a little. Why? Because this creates a dramatic narrative, which journalists crave like a crack high. A boring, incrementally mediocre administration won’t satisfy them. After the drama of his rise to power, Obama has to keep the drama and surprises coming. Scott Brown and the Fabulous 41 Block of the GOP serves both the MSM and the Obama camp.

Van also thinks the MSM is (are?) setting up a Comeback Kid narrative, which may well be the case.Â  But I have a slightly different take.Â  (Yes, in time-honored bloggish fashion, I’ve quoted Van as an excuse for quoting myself.)

Loyal A.T.I.N. readers (hi Sweetie!) will flash back to my Instalanche post the week before the Inauguration, when I started a “Honeymoon-Over Watch”:

[J]ournalists no longer have to worry that Obama might lose the election. Now the natural competitiveness of the news media will begin to overwhelm partisanship, at least until the 2012 race heats up. The honeymoon isnâ€™t over yet, and it certainly wonâ€™t end before the Inaugural. But starting next Tuesday (ok maybe Wednesday), when President Obama doesnâ€™t bring the troops home, doesnâ€™t close Guantanamo, doesnâ€™t end the recession, doesnâ€™t deliver national health insurance, doesnâ€™t roll back global warming and make the oceans recede â€” or at least doesnâ€™t do any of these things as fast as the Left would like â€” then things like the peccadillos of Tim Geithner will start to get more coverage.

(Emphasis added, to highlight the fact that one year in, Obama is five for five on the doesn’ts.)

Van and I are describing two sides of the same coin — his journalistic need for a dramatic narrative provides fuel for the journalistic competitiveness I described. Where I part company with Van is on the degree of trouble facing the Democrats.Â  If a Republican can handily win a statewide election in (“Don’t blame me, I’m from”) Massachusetts, something significant is afoot.

I hasten to add that it is possible, of course, to overstate the matter, as one Republican Party spinmeister did by saying “no Democrat is safe.”Â  Plenty of Democrats are safe.Â  But unless the Obama administration starts tacking right, some who think they are safe are likely to be voted out in November.Â  And I haven’t seen any sign in Obama of the kind of Clintonian centrist pragmatism that would enable him to become a Comeback Kid.

5 thoughts on “How Much Trouble are the Democrats In?”