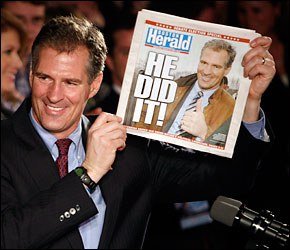 I guess we can’t call it the People’s Republic of Massachusetts any more.Â  At 52% to 47%, it wasn’t even particularly close.

Democrats in the House are stumbling over each other as they back away from the notion of approving the Senate-passed version of health care “reform” so that the Senate would not have to vote again.

The defeat of Martha Coakley represents a complete repudiation of President Obama’s domestic agenda, going well beyond health care. Massachusetts voters made it clear tonight with the decisive victory they gave to Republican Scott Brown that they want and expect the administration to pursue a dramatically different approach.

Wow.Â  Unless the Obama administration starts veering sharply back toward the center, the mid-term election in November will be even more dramatic.