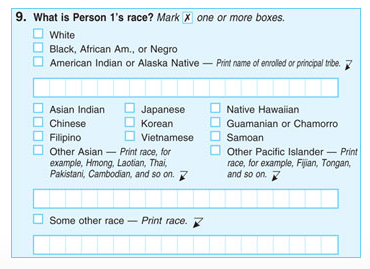 It’s Census time, and there’s a nefarious conservative plot afoot to undermine the gummint by subverting the racial purity of the decennial enumeration. The idea is to answer the racial question by ignoring the familiar black/white/Asian categories, selecting “Other,” and writing in “American.”

How do I know it’s a conservative plot?Â  Well, it’s been discussed at length in The Corner.Â  Taranto posted on his Facebook page that he “was American before it was cool,” and backed it up with a link to his article at the time of the 2000 census, where he advocated essentially the same thing.Â Â  There’s even a menacing quote from uber-conservative Supreme Court Justice Antonin Scalia: “In the eyes of government, we are just one race here. It is American.”

So it must be a conservative plot — except the Web Goddess doesn’t see it that way.Â  When I first mentioned the idea to her, she said it appeals to her from a liberal perspective.Â  The twist she suggests is to move back one step further and answer the race question with “Other – human.” There’s a logic to that, but it passes up an opportunity to make a patriotic statement.Â  If some future World Government takes a census, I’ll answer “human” on that one.

Another idea is for anyone who was born and raised in this country to answer “Native American” — but the Census folks seem to have anticipated this.Â  If you look at the form reproduced above, the category is labeled “American Indian or Alaska Native” — there is no Native American box to check.

One thing that’s clear is that you shouldn’t lie, as “native American” Hans A. von Spakovsky writes:

Congress has directed through a federal law that anyone who â€œrefuses or willfully neglectsâ€¦to answer, to the best of his knowledge, any of the questionsâ€ on the Census form can be fined $100 (13 U.S.C. Â§ 221).Â  If you deliberately give a false answer, you can be fined up to $500.Â  Although there are not a lot of reported prosecutions, this statutory requirement has been upheld by the courts as constitutional.

So the standard I have to meet is answering “to the best of [my] knowledge.”Â  OK, here are some samples of my knowledge:

So it turns out that to the best of my knowledge, I’m an American.Â  Who’s with me?