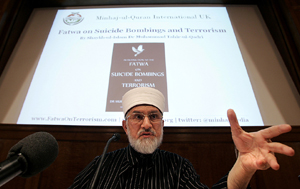 Pointing out that terrorists commit acts of self and mass murder with the firm conviction that they will be rewarded by God and that they are heaven bound, Dr.Qadriâ€™s fatwa convincingly advances scriptural evidence to demonstrate that the perpetrators of suicide bombings are destined for hell, not heaven.

â€œContrary to the mindset of the perpetrators of the 11th of September 2001 attacks in New York or the 7th July 2005 tube bombs in London, damaging enemy property or avenging a wrong done by another is strictly prohibited by sound Islamic scholarship,â€ Dr. Qadri told the audience.

I hope my new hero Dr. Qadri has taken security precautions.Â  There’s some debate over whether his fatwa is as “historic” as he claims, as well as how influential the fatwa will be, coming from a Sufi.Â  But as one Western academic said,

Those who are already hardliners will pay no attention at all. But “swing voters”â€” poorly educated and angry Muslims, who respect mainstream scholars, will probably take note.

From his lips to Allah’s ears.Â  The only hope for an enduring victory against radical Islam is for a different vision of Islam to take hold. (Hat tip: Glen, on Facebook)