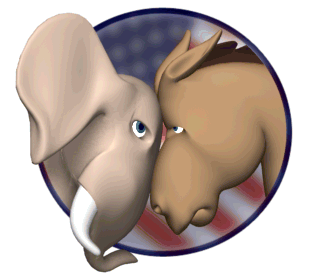 I’m highly skeptical of most assertions that either liberals or conservatives have a monopoly on any form of virtue or vice.Â  You know what I’m talking about — surf around partisan websites of either persuasion and soon you’ll find someone sanctimoniously condemning an anecdotal misdeed and declaring that “our side” doesn’t do that.

Bull.Â  There are plenty of flamethrowers and kooks on both sides of the aisle — along with a few thoughtful and intellectually honest partisans.

I was a lifelong liberal Democrat until I became a 9/11 Republican, so at one time or another I’ve seen the merits of a broad spectrum of political thought.Â  It’s only natural to be more inclined to give your own side a pass on inappropriate statements or actions that fall short of being repugnant.Â  The kind of excessive statement that pisses me off when it comes from the opposition may elicit just a grimace and a shrug if I otherwise agree with the speaker’s politics.Â  The process is visceral, not analytical, and it can foster the delusion that the bad people are all on the other side.

Having said all that, I think Taranto makes a persuasive case today that the echo-chamber effect afflicts the left more than the right.Â  I strongly advise reading the whole thing, but since most of you won’t, here’s a sample.Â  After citing a report that Fox News continues to gain viewers while ratings crater at CNN and MSNBC, he writes:

The right has dominated commercial talk radio for decades, and it can now be said to dominate cable news as well. Online, where barriers to entry are low, both sides can compete fiercely–though Budowsky is surely right that no one else has quite mastered the Drudge formula for influence.

The left, however, still rules the worlds of broadcast television, newspapers, public radio and wire services (nonjournalistic cultural institutions like Hollywood and higher education are beyond the scope of this discussion). The wire services, such as the Associated Press and Bloomberg, are especially important, because they have filled much of the gap in basic news reporting as newspapers and TV network news divisions have cut back.

It is possible, now, for a conservative to opt out of the liberal media and get all his news from more or less congenial sources. But our guess is that it is not yet common practice.

I think the reference to Hollywood and higher education is particularly deft — making his point without having to get bogged down in additional examples.Â  Surely nobody can argue with a straight face that Hollywood and academia generally lean to the right.

Popular culture skews so relentlessly to the left that I think it’s impossible for even the most narrow-minded conservative to avoid any exposure to liberal thought.Â  Narrow-minded liberals need only avoid Fox News and talk radio (and a bunch of websites they don’t have bookmarked anyway).

In case anyone is interested, I’ll admit to spending a lot more time on conservative commentary websites than on liberal ones.Â  But for (more or less) straight news, my go-to website is CNN.com, and on the rare occasions that I watch news on TV, I tend to favor CNN there as well.Â  On most days I at least glance at the homepages of the Washington Post, Wall Street Journal and New York Times.Â  Despite the snarky assumption of one of my favorite jousting partners, I doubt I’ve seen as much as half an hour of Fox News in my life.Â  And don’t get me started on Limbaugh.

One thought on “Left vs. Right: Who Has the Best Echo Chamber?”