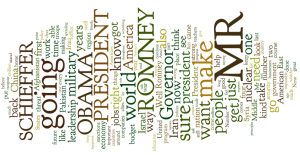 4 thoughts on “Cliff Notes on the Final Debate: Not a Game-Changer”