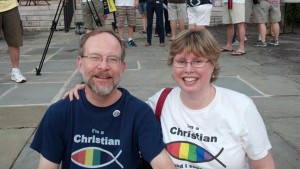 The Web Goddess and I joined a small but joyous impromptu gathering yesterday evening on the steps of Maplewood Town Hall, celebrating the Supreme Court decisions in support of marriage equality for same-sex couples.

I’ve blogged and demonstrated in favor of marriage equality for years, so I’ll not rehearse those arguments today.Â  Instead, I’m moved to take keyboard in hand by a comment I heard expressed twice on the Town Hall steps yesterday, to the effect that the Supreme Court “got one right the day after they got one wrong.”

A day earlier, the high court struck down a key provision of the Voting Rights Act, ruling that conditions have changed in the South since 1965. In the minds of many at yesterday’s rally, this was a setback for black rights that partly offset the victory for gay rights the following day.

But I see both rulings as a victory for federalism, or for states’ rights if you will — and anyone tempted to dismiss “states’ rights” as code for bigotry should pause to reflect on the pioneering role of the states in the marriage equality struggle.

The VRA ruling has the limited effect of restoring to nine states of the old Confederacy (and various smaller jurisdictions) the same level of control over the election process exercised by other states.Â  The federal government and the courts retain the power to invalidate any specific election practice that is discriminatory.Â  The VRA ruling simply shifts the burden of proof from the states to the parties seeking to demonstrate discrimination.

The pre-clearance provision of VRA was an extraordinary response to an extraordinary level of institutionalized racism, and I have no quarrel with the need for such a measure in 1965. But NBC News cited statistics compiled by the court that show how dramatically the situation has changed:

In Alabama, for example, the white registration rate was 69 percent and the black rate 19 percent in 1965. By 2004, that gap had all but disappeared â€” 74 percent for whites and 73 percent for blacks.

As George Will noted, “Mississippi has more black elected officials â€” not more per capita; more â€” than any other state.”

The South no longer deserves a presumption of guilt on racial matters.