The abortion issue lends itself to extremism.Â  The only logically consistent positions are at the extremes.

The pro-life extreme can be summed up in three words: “Abortion is murder.”Â  The pro-choice extreme is more complicated.Â  The mainstream pro-choice movement’s rallying cry of “keep abortion safe and legal” doesn’t come close to being extreme.Â  Something can be safe and legal and yet still be morally ambiguous.

Activist Florynce Kennedy came closer to a pithy expression of pro-choice extremism when she said “if men could get pregnant, abortion would be a sacrament.”Â  But the line has a chuckle-inducing quality that keeps it from being nearly as powerful as “abortion is murder.”Â  Besides, she’s not actually saying that abortion IS a sacrament — she’s making a hypothetical statement that may, I think, have some validity.

Here’s how I’ve always articulated what I think of as the extremist pro-choice position: “A woman’s right to an abortion trumps all other considerations.”Â  A pithier version: “Abortion rights are absolute.”

The overwhelming majority of Americans come down between the two extremes.Â  Personally, I think Bill Clinton had it just about right when he said abortion should be “safe, legal and rare.”Â  But that formulation is deliberately imprecise — it can’t serve as a clear roadmap to legislation.Â  Bill Clinton supported laws requiring parental consent and a 24-hour waiting period.Â  Other generally pro-choice people would draw the lines inÂ  different places, but most would still draw lines.

Here are two clear roadmaps, each of them logical and internally consistent:

Although there are people who advocate one direction or the other, for most of us those maps take us places where we do not want to go.Â  If abortion truly is murder, then yes, a woman should be forced to bear her rapist’s baby, even in the case of incest.Â  If abortion rights are absolute, then third-trimester abortions for gender-selection purposes cannot be ruled out.Â  I reject both of those positions, and I am grateful that I am not, myself, empowered to decide where the lines should be drawn.

These thoughts are all occasioned by reports that the Rev. Katherine Ragsdale, the newly named dean of the Episcopal Divinity School in Cambridge, MA, apparently has insisted from the pulpit that “abortion is a blessing, and our work is not done.”Â  She also stated that abortion providers and pro-choice activists are “engaged in holy work.” 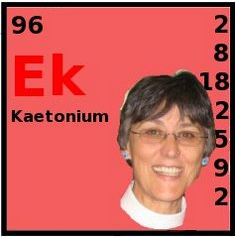 Hat tip to a force of nature

I learned of this from reading the blog of the Rev. Elizabeth Kaeton, an Episcopal priest from a nearby township in New Jersey.Â  This post actually started its life as an extended comment on her blog.Â  I’ve jousted with Mother Kaeton in her comments in the past, and I realized this time that it made more sense to lay out my thoughts on my own site.

Before today I had never heard of the Rev. Katherine Ragsdale, and I have no opinion about whether she is a good choice for Dean of EDS. She doesn’t look like an extremist in the photo above from the EDS website, and I won’t pin that label on her.

But I’ll pin it on that particular sermon.Â  Her insistence that “abortion is a blessing” is, I think clearly, well outside the mainstream, even among supporters of abortion rights.Â  I think Dean Ragsdale does the pro-choice cause no benefit by making that proclamation, and I’m glad she has removed it from her website.

Dean Ragsdale was villified by a ham-handed conservative blog as “a lying baby-murdering witch” (I’ve inserted the essential hyphen), which was what set Mother Kaeton off on what she herself described as a rant.Â  The anonymous ham-handed blogger does the pro-life cause no benefit either.

This is not to imply moral equivalence.Â  The anonymous blogger’s headline is disgraceful, and arguably an incitement to violence against a single individual.Â  Dean Ragsdale’s sermon is merely wrong-headed, and contemptuously dismissive of the views of, I believe, the vast majority of Americans.

People are complicated.Â  I voted for McCain and I market this blog as the ruminations of a “red voter in a blue state.” But I’m not a social conservative, and I join Mother Kaeton in standing proudly to the left of President Obama on the issue of marriage equality for same-sex couples.

Issues also are complicated, and reasonable people can differ.Â  In the case of abortion, far too often the battle lines are drawn by unreasonable people.Â  Most of us prefer a middle way.