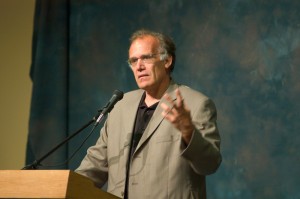 Victor Davis Hanson is one of my favorite political writers.Â  He brilliantly weaves together seemingly unrelated news events to describe patterns that others cannot yet see.Â  I wish I had been aware of him on September 11, 2001, because he went into overdrive, producing 38 outstanding essays before the end of the year about the new world we had entered and the enemies we faced.

The essays, for National Review Online and other outlets, are collected in his book An Autumn of War. TheyÂ  hold up remarkably well — if I had read the essays at the time, I would have had a tremendous head start toward realizations and understandings that took me years to reach.

I’ve been a bit disappointed by him in more recent months — his antipathy to Barack Obama sometimes veers toward Obama Derangement Syndrome.Â  But his essay today on National Review Online has him in fine form, and not sparing the Republicans. An excerpt:

Nonsense is passed off as wisdom. Those who caused the financial meltdown walked away with millions in bonuses while taxpayers covered the debts they ran up. The big-spending government claims it may cut our annual $1.7 trillion deficit in half by 2012 â€” but only after piling up trillions more in national debt.

In our Orwellian world, borrowing to spend what we donâ€™t have has been renamed â€œstimulus.â€ Those who pay no federal income taxes â€” almost half of Americans â€” can somehow be promised an income tax â€œcut.â€ In the new borrowing of trillions of dollars here and trillions there, billions of dollars now sounds like pocket change. …

Abroad, we thought piracy ended with the age of sail â€” only to learn that the worldâ€™s 21st-century navies either will not or cannot sink a few brigands in speedboats. Meanwhile, a U.N. conference against racism showcased Iranian president â€” and Holocaust-denier â€” Mahmoud Ahmadinejad spouting anti-Semitic hatred.

The old â€œbadâ€ unilateral war in Iraq is now quiet; the once â€œgoodâ€ multilateral effort in Afghanistan is not. We are warned that we must be careful not to explicitly associate the radical Islam that fueled the September 11 attacks with terrorism; yet, we are advised that we should worry about returning American veterans as potential terrorists.

You should, as the saying goes, read the whole thing.Â  But since you probably won’t, here’s the ominous punchline: