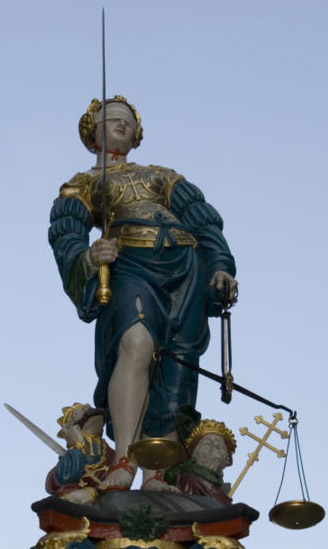 There's a reason for the blindfold

Sonia Sotomayor likely will become a reliably liberal vote on the Supreme Court, replacing the reliably liberal David Souter.Â  Despite my distaste for identity politics and legislation from the bench, I don’t see this as a disaster — nor do many of the conservative columnists I’ve read.

After describing one of Sotomayor’s decisions, James Taranto writes that he approves of:

“Sotomayor’s instinct to err on the side of protecting speech–an instinct that was a hallmark of “liberal” jurisprudence in the days of the Warren court but really is not anymore. …

If President Obama’s first nominee turns out to be an old-style liberal with a reverence for free speech, the country could have done a lot worse.

Krauthammer notes that “a president is entitled to deference on his Supreme Court nominees, particularly one who so thoroughly reflects the mainstream views of the winning party. Elections have consequences.” Rather than try to sink the nomination, he thinks Republicans should use it as a platform for discussing judicial philosophy, and the proper role for “empathy” in government.

Since the 2008 election, people have been asking what conservatism stands for. Well, if nothing else, it stands unequivocally against justice as empathy — and unequivocally for the principle of blind justice.

Empathy is a vital virtue to be exercised in private life — through charity, respect and loving kindness — and in the legislative life of a society where the consequences of any law matter greatly, which is why income taxes are progressive and safety nets are built for the poor and disadvantaged.

But all that stops at the courthouse door. Figuratively and literally, justice wears a blindfold. It cannot be a respecter of persons. Everyone must stand equally before the law, black or white, rich or poor, advantaged or not.

Obama and Sotomayor draw on the “richness of her experiences” and concern for judicial results to favor one American story, one disadvantaged background, over another. The refutation lies in the very oath Sotomayor must take when she ascends to the Supreme Court: “I do solemnly swear that I will administer justice without respect to persons, and do equal right to the poor and to the rich. . . . So help me God.”

The day after the nomination was announced, the Wall Street Journal editorialized:

As the first nominee of a popular President and with 59 Democrats in the Senate, Judge Sotomayor is likely to be confirmed barring some major blunder. But Republicans can use the process as a teaching moment, not to tear down Ms. Sotomayor on personal issues the way the left tried with Justices Clarence Thomas and Sam Alito, but to educate Americans about the proper role of the judiciary and to explore whether Judge Sotomayor’s Constitutional principles are as free-form as they seem from her record.

At the Heritage Foundation, Robert Alt illustrates the limitations of empathy as a legal standard:

My late constitutional law professor once offered the following hypothetical about a fishing dispute that made its way to court. On one side were Native Americans; on the other, environmentalists. After a pregnant pause, he mused: “What’s a liberal to do?” Were he to teach the class today, he might well have asked, “What’s an empathetic judge to do?”

As this hypothetical illustrates, empathy, the factor by which President Obama claims that he selects his judicial nominees, is highly subjective, and provides little direction for judges. In some cases, all of the parties are sympathetic. In other cases, none are. In still other cases, the law may be unambiguously on the side of a party who is less sympathetic.

If empathy is the guiding principle, how is a judge to decide these cases? And how do we separate empathy from personal bias?

Here, then, is a modest proposal: In choosing nominees, President Obama should seek judges who would apply the Constitution and the laws as they are written, and interpret them consistent with their plain and original meaning.

Based on some of the available evidence, that doesn’t appear to describe Judge Sotomayor. Also at the Heritage Foundation, Deborah O’Malley notes that Obama pays lip service to rule of law — but actions speak louder than words:

Obama says that an important quality in a nominee is the recognition of the limits of the judicial role. Thus judges should “interpret, not make law” and approach decisions with a “commitment to impartial justice.” With these words, it’s curious he’d select a nominee who disagrees.

Judge Sotomayor has made several public statements denouncing — and even lightly mocking — the idea that courts should be impartial and shouldn’t engage in policymaking.

I join the Journal in hoping that Republicans will keep their criticism focused on Judge Sotomayor’s rulings and statements, and not descend into ad hominem attacks.Â  I think Thomas Sowell overreaches and does his cause no favor by referring to Sotomayor as “this dangerous woman.”