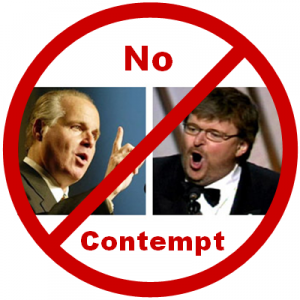 Parts of the rightosphere are in high dudgeon about the fact that President Obama, at the annual White House Correspondents Association yuck-fest dinner, laughed at “jokes” told by “comedian” Wanda Sykes about wanting Rush Limbaugh to die of kidney failure.Â  (Here’s a 78-second video.)

At Best of the Web Today, James Taranto says:

In Obama’s wide grin as Sykes was telling her joke, we saw the smug look of a man who enjoys seeing his critics dehumanized. The president of the United States should be better than this.

The conservative whom other conservatives love to hate, Kathleen Parker, thinks the whole thing is overblown, and sarcastically suggests that we’re “on the verge of appointing a Special Commission on Acceptable Humor.” She says:

Lost in the frenzy is the more important matter of our thin-skinned intolerance and our reflexive lurch to take offense. We might remind ourselves that it’s always the fanatics who can’t take a joke.

I think she’s on to something.Â  I get awfully tired of having the discussion framed by flame-throwing provocateurs.Â  When Limbaugh famously was quoted as saying about Obama, “I hope he fails,” a liberal friend asked me how I felt about having Limbaugh speak for the Republican Party.Â  That’s when I spoke the words from the headline above.

What do Rush Limbaugh and Michael Moore have in common?Â  Well, they’re both much richer and better known than I will ever be, because they’ve each attracted vast followings.Â  Negativity sells.Â  Personal attacks work.Â  Would that it were otherwise.

I can’t get too exercised over Obama laughing at the idea of Limbaugh’s death.Â  Who among us hasn’t laughed at inappropriate jokes? And Limbaugh, coiner of “feminazis” and other evocative slurs, is an enthusiastic practitioner of the “dehumanization” tactics that Taranto criticizes.

I wish I knew where I’m going with all of this.Â  The post started as a vehicle for its headline and graphic, but beyond that, I’m not sure what my point is.Â  Maybe something about the importance of the clash of ideas in a democracy?Â  Sometimes when I write a blog post, the key conclusion that ties everything together emerges gradually as I think and type.Â  And sometimes, the only way I can think of to end a post is to drive it off a cliff.