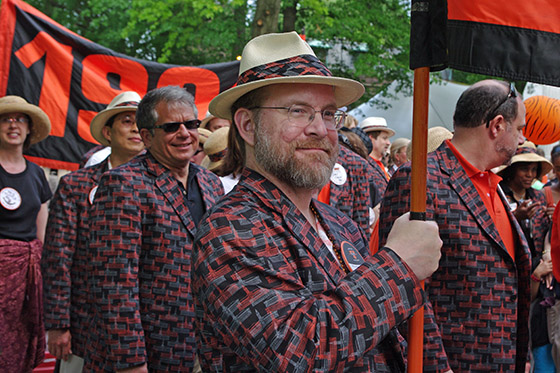 The Class of 1980 has what counts as a muted and tasteful class costume, by Princeton standards, with line drawings of Nassau Hall as design elements.

Today I had the high privilege and distinct honor of fighting the wind with the parade banner for the Princeton Class of 1980, leading a hardy band of quintagenerians in an off-year reunion march at the “Best Damn Place of All,” in the words of the song.

When asked which side of the banner I would like to hold, I promptly said “I should have the right,” as the lovely Web Goddess rolled her Obama-supporting eyes.

The P-rade is an annual pilgrimage for me — since graduation I have never lived more than an hour away from campus, and while I haven’t made it backÂ  every year, I’m sure I’ve been to more than 20 of my 29 reunions.Â  After the P-rade I always swing by The Daily Princetonian picnic, but this year I was disappointed at not finding any of the folks I worked with when I got my start as a writer.

I did see an old Princetonian friend earlier in the day, when Joel Achenbach ’82 ably moderated a panel titled “Money, Greed and the Economy: Views from the Fourth Estate.”Â  In addition to his day job as a reporter and columnist at the Washington Post, Joel is the Chairman of the Advisory Board of the Princeton Alumni Weekly, which sponsored the panel, and where I got one of my first actual paychecks as a freelance (I repurposed my Junior Paper about the arrival of casino gambling in Atlantic City, I think I got $100 for the article, which never ran).

The panel featured George F. Will *68 (the asterisk indicating a graduate degree) as the headliner.Â  The advance program advertised Katrina vanden Heuvel ’81, editor of The Nation; she was a no-show, but the Obstreperous Lefty chair was ably filled by Josh Marshall ’91 of Talking Points Memo, who seemed to take delight in sniping at George Will. Â  After accusing Will of having “an ideological stake” in what he was saying — pot, meet kettle –Â  he boasted that he was “the only business owner on the panel, I meet a payroll, I don’t just write a column.” Will replied mildly that his GFW Inc. meets a payroll — it appears to have six employees.

The discussion was interesting — Will got a laugh when he said the press generally has not focused on the “300 million real culprits” behind the economic collapse.Â  Peter Slevin ’78, the Washington Post’s Chicago bureau chief, told of interviewing people with $25,000 salaries who had $400,000 mortgages, as part of a lively discussion on personal responsibility and perverse banking incentives.

All in all, a long and tiring day, under beautiful blue skies, low humidity, and a nice breeze that I enjoyed once I stopped carrying the banner.Â  Next year is my 30th reunion, and there will be more classmates in attendance.Â  I’ve heard it said that no other university in the country makes as big a deal about reunions as Princeton, and I think that may well be true.

(Reunions photos by the Web Goddess)