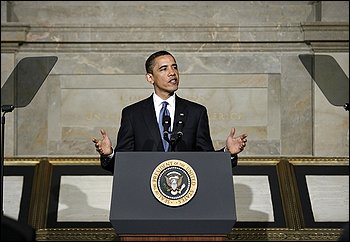 The genius of democracy is that the rotation of power forces the opposition to come to its senses when it takes over. When the new guys, brought to power by popular will, then adopt the policies of the old guys, a national consensus is forged and a new legitimacy established.

Exactly right.Â  I fear that Obama is busily making a mess of the economy — or rather, more of a mess.Â  But on national security, it becomes clearer every day that despite Obama’s persistent sniping at his predecessor, we’ve essentially re-elected George Bush, and I for one am grateful.

After starting by retaining Bush’s Secretary of Defense, Obama has begun a surge in Afghanistan, adopted Bush’s timetable for withdrawal from Iraq, authorized repeated Predator drone strikes on al Qaeda targets in Pakistan, affirmed the use of military commissions, and yesterday acknowledged that some terrorists will have to be held indefinitely even though it will not be possible to prosecute them successfully.

President Obama and former Vice President Cheney weren’t so much a study in contrast today as a portrait of harmony. Both men agree that the Bush administration’s anti-terrorist policies were largely correct. Cheney signaled his acceptance of this view by vigorously defending those policies. Obama signaled it by largely adopting those same policies and emitting a fog of words to cover up the fact. (See this defense of Obama for a run-down of all the continuities.)

Obama’s fellow Democrats are helping to save him from his ill-advised promise to close Guantanamo within a year — the Senate vote eliminating funding for the closure was 90-6.Â  On the torture issue, Obama is trying to reclaim the moral high ground for America, and as long as he continues aggressively prosecuting the war, I largely wish him well.Â  It will give him a means of staking out a genuine policy difference, it may gain us some goodwill abroad, and if a time comes when we once again have a Khalid Sheikh Mohammad in custody smirking that “soon you will know” about imminent terror attacks, I strongly suspect that somebody will find a technique and a justification for doing what needs to be done.

I caught snatches of Obama’s speech yesterday on the radio, and I remember thinking that if I closed my eyes, I could imagine these words coming out of Bush’s mouth:

This responsibility is only magnified in an era when an extremist ideology threatens our people, and technology gives a handful of terrorists the potential to do us great harm. We are less than eight years removed from the deadliest attack on American soil in our history. We know that al Qaeda is actively planning to attack us again. We know that this threat will be with us for a long time, and that we must use all elements of our power to defeat it.

Of course he quickly slipped back into campaign mode and blamed every problem on the Bush Administration.Â  But that will get old quickly, even among his supporters.Â  Meanwhile, look to his deeds, not just his words.