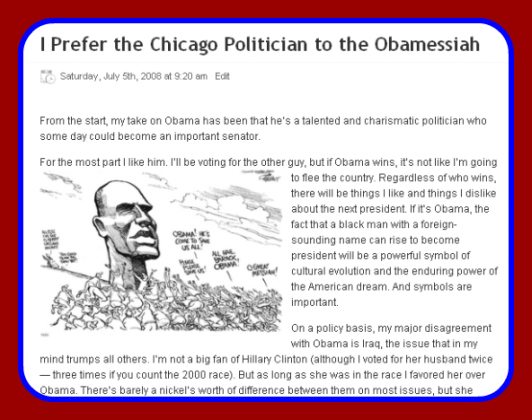 It must have been embedded in the recesses of my memory, because something just made me check the archives.Â  It was one year ago today that I made my first substantive post on this blog.Â  (The first of a handful of frivolous posts was more than five years ago.)

I led with a snarky prediction that presidential candidate Barack Obama “some day could become an important senator.”Â  That turned out to be wrong — he went straight from first-term senator to president.Â  But other than that I think the first post holds up reasonably well.

I would be honored if you read the whole thing, but since most people don’t click links, I’ll paste the concluding paragraph here:

So I still prefer McCain as commander-in-chief, but I take comfort in the overwhelming evidence that Obama is a politician. Politicians know how to maneuver around unwise campaign promises, and how to avoid being held hostage by their political base.

7 thoughts on “It Turns Out Today Is My Blogiversary”