(Welcome, New York Times readers. You might be interested in other posts about New Jersey and Maplewood.) 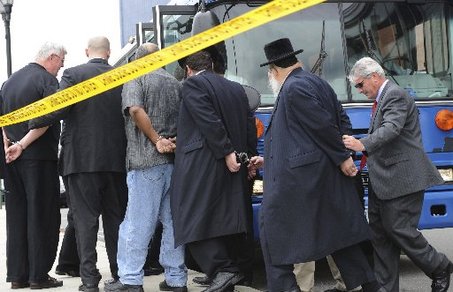 My adopted home state of New Jersey has a long sordid history of political corruption.Â  We’re not yet five years removed from Gov. Jim McGreevey’s resignation after the revelation that he had appointed his unqualified boyfriend to a $110,000 state public safety job. We’ve also had Abscam in the 1980s, indictments of five of the last seven Newark mayors, and the list goes on and on.

So I didn’t pay too much attention to the mass arrests last week, until I stumbled on a long Wall Street Journal article putting it in historical perspective.Â  Here’s the set-up:

This latest episode featured 44 people, an unprecedented number even for New Jersey, being charged in an investigation into public corruption and international money laundering. The bust included five rabbis, three assemblymen and two mayors, prompting one late-night caller on the stateâ€™s talk radio station, New Jersey 101.5, to ask, â€œWhereâ€™s the partridge in the pear tree?â€

There’s lots of colorful detail, going back to Colonial days, but what appealed to my libertarian sensibilities was the author’s attempt to explain why there’s so much public corruption in the state.

[T]he state is enormously over-governed. In most states, the local unit of government is the county; in others, itâ€™s the municipality. In Jersey, we have both, and lots of them. There are 566 municipalitiesâ€”California, with four times the population, has only 480â€”and each has a mayor and/or councils. The 21 counties have their various freeholder boards and utility commissions and there are also 120 state legislators. When that many people have their hands in the cookie jar â€”and there are that many cookie jarsâ€”is it any wonder that you get people selling Oreos out of their trunk in the parking lot to make a little extra cash on the side?

Most of the corrupt pols in this deep-blue state have been Democrats, and the recent batch is no exception.Â  It’s annoying to me (yes, I take it personally) that the arrests came just days after I announced my tepid support for the re-election of Gov. Jon Corzine, a Democrat.Â  A headline on PolitickerNJ.com sums up the situation pretty well: “Corzine is Not Corrupt — But the Corruption Scandal Dooms His Campaign.”

I can’t bring myself to vote for likely future Gov. Chris Christie because of his fervent opposition to marriage equality for same-sex couples — including a veto promise and support for a constitutional amendment. Â  But he’s already so far ahead that he doesn’t need my vote.Â  As the Journal article notes, he’s a former U.S. Attorney with a 130-0 record in prosecuting corruption cases.Â  Sounds like a silver lining to me.