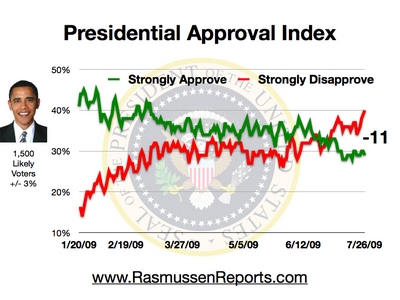 President Obama has slipped to the worst rating of his young presidency in the daily Rasmussen Presidential Tracking Poll, weighing in at -11 points.Â  That’s based on likely voters with strong opinions.Â  He fares better when you look at total approvers vs. total disapprovers — although for the first time, or at least the first time I’ve noticed, he’s in slightly negative territory there as well, with 49% at least somewhat approving of his performance and 50% disapproving.

As soon as I saw that strong uptick in the red strongly-disapprove line above, I knew it had to be a result of Gates-gate, and Rasmussen confirms that.Â  It’s unfortunate that Obama chose to squander some of his post-racial cred by meddling in an ambiguous incident in a town with a black police commissioner and a black mayor, in a state with a black governor, in a country with a black president.

BTW, I would not show up on Rasmussen’s tracking poll, because I would tell the pollster that I “somewhat disapprove.”Â  Foreign policy is key for me in evaluating a president, and I give Obama positive marks for continuing President Bush’s policies on Iraq and Afghanistan. (Iran, not so much, although he eventually decided which side to back.) But I’m opposed to pretty much everything he’s trying to do domestically.