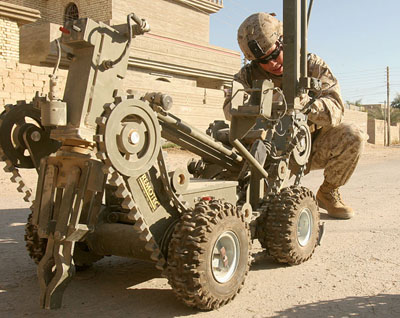 The Web Goddess, who truly is a Renaissance Woman, is fascinated by neurology. She hungrily devours any book or article for general audiences about how the brain and central nervous system work.

If you share that interest at all, I highly recommend the story she flagged for me this morning, which was in yesterday’s New York Times Science section.

I find the story gripping for an entirely different reason, about which more to come.

It turns out that when it comes to Improvised Explosive Devices (IEDs), fancy American technology is great, but there’s no substitute for the instincts of (certain) American soldiers.

[H]igh-tech gear, while helping to reduce casualties, remains a mere supplement to the most sensitive detection system of all â€” the human brain. Troops on the ground, using only their senses and experience, are responsible for foiling many I.E.D. attacks, and, like Sergeant Tierney, they often cite a gut feeling or a hunch as their first clue.

Everyone has hunches â€” about friendsâ€™ motives, about the stock market, about when to fold a hand of poker and when to hold it. But United States troops are now at the center of a large effort to understand how it is that in a life-or-death situation, some peopleâ€™s brains can sense danger and act on it well before othersâ€™ do.

“Sergeant Tierney” refers to a soldier who saved the life of a comrade one summer morning by sensing that something was wrong on a nearly deserted street in Mosul.Â  The article opens with a scene-setter about a soldier under Tierney’s command who sought permission to give some water to two Iraqi kids in a closed car on a 120-degree day.

The 2,100-word article makes you wait to the very end to learn what happened, but you can guess the outcome.Â  Sergeant Tierney denied permission for the humanitarian gesture — and when the soldier turned around to fall back, the car was exploded remotely.Â  The unidentified soldier suffered only minor injuries — but the two young Iraqi boys, of course, suffered the fate their elders intended.

Sort of puts waterboarding a known mass murderer into perspective, doesn’t it?

My point here (and I don’t necessarily speak for the Web Goddess) is not to advocate waterboarding, a practice I oppose.Â  To paraphrase a recent American president, my point is that good and evil both exist in the world — and the God of my understanding is not neutral between them.

That’s right: I believe God is on our side, in a war against an enemy that has perverted a major global religion.

America is not perfect.Â  Americans are not perfect.Â  But to quote an unsuccessful recent presidential candidate (who also opposes waterboarding), “America is the greatest force for good in the history of the world.”Â  I would tack on: “this side of the Almighty.”

Some will argue that a belief in God’s blessing is exactly the kind of self-justifying mindset that leads to excesses like waterboarding.Â  I think the opposite is true.

Our society has a passionate yearning for God’s approval (or for my secular friends, a yearning to be Good).Â  That yearning leads us to wrenching but necessary national debates about the precise point where interrogation goes too far — while our enemies deliberately murder two young co-religionists in an effort to take advantage of our humanitarian instinct.