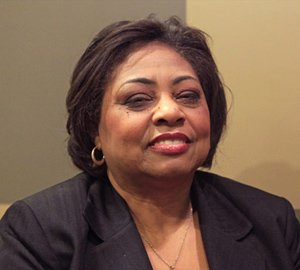 (Photo of Sherrod from CNN)

Apparently someone in the Agriculture Department snoozed through the part of every old courtroom movie when the judge says, “before I pass sentence, is there anything you would like to say?”

How dumb do you have to be to fire someone in the midst of a publicity firestorm without giving that person an opportunity to say “IT’S NOT TRUE”?

Shirley Sherrod, an obscure but clearly honorable bureaucrat in a USDA outpost in Georgia, apparently was ordered via cell phone to pull over to the side of the road and “resign” because of a brief, selectively edited video that portrayed her as a racist.Â  The snippet of video was violently snatched from its context, and while “out of context” normally sounds like a feeble excuse, in this case the damage to reality is profound.Â  Ms. Sherrod, who is black, was essentially telling the story of how, more than 20 years ago, she had overcome her own prejudices against white people.

The deceptively edited video was first aired by conservative journalist and Tea Party advocate Andrew Breitbart, who has not helped his own cause. Breitbart was lashing out at the NAACP for accusing the Tea Party movement of racism based largely on a few offensive signs seen at Tea Party rallies.Â  The video shows Sherrod speaking at an NAACP event, and Breitbart contended it showed audience approval of the supposedly racist comments.

He has not said who gave him the video, but has said he received it in its edited form, and that he did not have the video of the entire speech.Â  Here’s a link to the entire 43-minute speech; the story of young Ms. Sherrod confronting her own racial animus begins at about 16:40.Â  It’s impossible to watch that segment and to emerge believing it reflects badly on her.Â  The editing was conscious deception.Â  If Breitbart didn’t do the editing, he’s going to need to give up whoever did.

Agriculture Secretary Tom Vilsack says that he, not the White House, ordered Ms. Sherrod’s dismissal, and that seems credible to me. So it’s hard to pin this one directly on Obama, but it’s just the latest in a long line of racial miscues by the administration of the man who was supposed to be our first post-racial president.

It was almost exactly one year ago when Obama dove headfirst into “Gates-gate,” a Cambridge racial controversy he didn’t fully understand.Â  There was the spectacle of Obama’s attorney general, Eric Holder, accusing America of being a “nation of cowards” for not being even more obsessed with talking about racial grievances.Â  And there was Van Jones, the “green jobs czar” and 9/11 Truther nutcase who finally was forced out after the revelation that he participated in an anti-American recording narrated by convicted cop-killer and far-left poster child Mumia Abu-Jamal.Â  And going back to the 2008 campaign, let’s not forget that it took candidate Obama forever to finally face up to the mounting evidence that his pastor of 20 years was an anti-American racist.

Shirley Sherrod is the innocent victim here, let’s give her the last word:

that he participated in an anti-American recording narrated by convicted cop-killer and far-left poster child Mumia Abu-Jamal.

3 thoughts on “Shirley Sherrod, and the Administration That Couldn’t Shoot Straight on Racial Matters”