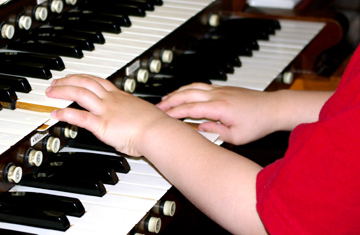 I met a remarkable young man recently — a six-year-old taking organ lessons at the church where I work.Â  I wrote about him for Patch.com’s Madison website.Â  Here’s how it starts:

His feet don’t reach the pedals.Â  His arms barely stretch to the top keyboard.Â  His pudgy little fingers seem dwarfed by the keys. But six-year-old Henry Marinovic of Madison is learning to play the organ.

“I’m actually pretty good,” he explained, accurately, shortly after I met him.

He has a piano at home, but the organ at Grace Episcopal Church is so much louder and cooler â€“ all those buttons and stops.Â  His hands wander over the keyboard for a moment, producing a vigorous riff. I ask him if that’s a piece of music he has memorized, but his mother Amy says he was making it up.Â  “It’s called improvising,” Henry says helpfully.

Read the whole thing at Patch.com.Â  If you’re interested in reading more of my Patchwork, here’s a link to the complete oeuvre.Â  (What is Patch, you ask?Â  I’ve got an answer for that, too!)