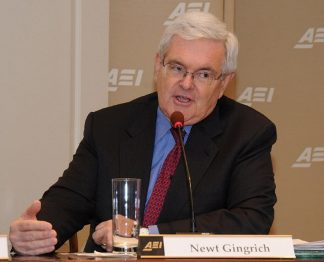 You’ll never see me use the term “War on Terror” outside of quotation marks.Â  Terror is not the enemy, it is one of the enemy’s tactics.

That part is simple.Â  DecidingÂ  what to call the enemy is much more complicated.

I continue to resist the idea that Islam itself is the enemy, although others are willing to go there.Â  The term I’ve used most often is “Islamic fascism,” implying as it does a state-supported (or more precisely, supra-nationally-supported) tyranny.Â  I’m not fond of “Islamism,” a widespread term, although I accept it when others use it.Â  “Jihadism” has a certain appeal, in that it is unambiguously Islamic, but the clarity of the term gets muddied by the myth that Jihad means “inner struggle.”

Newt Gingrich has now stepped forward with an elegant and powerful solution to determining whether someone is an enemy.Â  Our enemy is anyone who seeks to impose sharia, the barbaric legal and social code spawned in seventh century Arabia.Â  (Hat tip: Andy McCarthy, who wrote the words quoted in my headline.)

Gingrich’s hour-long speech at the American Enterprise Institute can be found here.Â  I confess I have not yet watched it in its entirety — making this post somewhat risky, although I’m confident that McCarthy would not pull a Breitbart. Â  But I’ve read McCarthy’s NRO piece and watched the five-minute Gingrich highlights reel.Â  Between that and writing this blog post, here it is past noon on my first day on Cape Cod, and I’m blogging in my PJs while the rest of the household is at the beach.Â  Ah well… here’s McCarthy’s summation:

Debate over all of this is essential. The crucial point is that we must have the debate with eyes open. It is a debate about which Gingrich has put down impressive markers: The main front in the war is not Afghanistan or Iraq but the United States. The war is about the survival of Western civilization, and we should make no apologies for the fact that the Westâ€™s freedom culture is a Judeo-Christian culture â€” a fact that was unabashedly acknowledged, Gingrich reminded his audience, by FDR and Churchill. To ensure victory in the United States we must, once again, save Europe, where the enemy has advanced markedly. There is no separating our national security and our economic prosperity â€” they are interdependent. And while the Middle East poses challenges of immense complexity, Gingrich contended that addressing two of them â€” Iran, the chief backer of violent jihad, and Saudi Arabia, the chief backer of stealth jihad â€” would go a long way toward improving our prospects on the rest.

Most significant, there is sharia. By pressing the issue, Newt Gingrich accomplishes two things. First, he gives us a metric for determining whether those who would presume to lead us will fight or surrender. Second, at long last, someone is empowering truly moderate Muslims â€” assuming they exist in the numbers weâ€™re constantly assured of. Our allies are the Muslims who embrace our freedom culture â€” those for whom sharia is a matter of private belief, not public mission. Our enemies are those who want sharia to supplant American law and Western culture. When we call out the latter, and marginalize them, we may finally energize the former.

Itâ€™s that simple. Not easy, but simple.

4 thoughts on ““Islamism Is Not a Movement to be Engaged, It Is an Enemy to be Defeated””