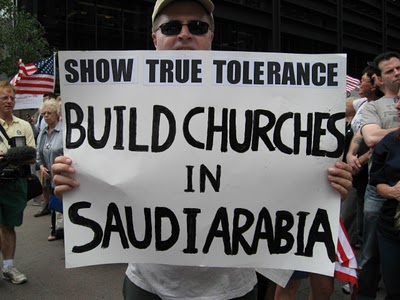 The controversy over the bigger-than-a-mosque Islamic center proposed on a site chosen for its proximity to Ground Zero bears an unappealing resemblance to the abortion issue.

Lots of principled and meritorious arguments advanced on both sides.Â  A high ratio of heat to light. Fierce disagreements over terminology:Â  pro-choice or pro-abortion, mosque or community center, at Ground Zero or near it. A debate dominated by absolutist rhetoric, drowning out anybody seeking a middle ground. (My own position on abortion can be summed up by a headline on my blog: “Abortion Should Be Safe and Legal — But It Stops a Beating Heart.”)

Thinking of the current debate in the context of abortion gives me some sympathy for President Obama’s ham-handed attempt to have it both ways: He supports the mosque.Â  No, he just means it’s legal.Â  (In the category of things that feel like other things, Obama’s handling of the GZ mosque resembles the even more problematic Obama approach to Afghanistan: We’re surging… but only for a year.)

A friend and former ink-stained co-worker launched a new blog this week, focused thus far on the mosque controversy.Â  He and I come down on different sides of the argument, but I liked this passage:

The important thing is not one viewpoint triumphing over another. Itâ€™s restoring reasoned and reasonable conversations about stuff that really matters, and making sure that discourse douses the flamers who seek only to divide and exploit.

So in the interests of reasoned discourse, I want to acknowledge that religious freedom is one of the core, foundational values of this country, and Americans rightly have a visceral reaction to anything that smacks of religious intolerance.

But religious freedom is not the only thing at stake here. The analogy of the Pope asking the Carmelite nuns to move their convent out of Auschwitz is a good one — however good the sisters’ intentions were, their presence there was offensive to people who had survived a monstrous atrocity.

The controversy threatens to obscure the crucial distinction between Islam and Islamofascism.Â  In a lengthy essay at Pajamas Media titled “A Message to Conservatives: Is Islam Really our Enemy?”, Ron Radosh strongly makes the case that it is not:

Unlike those in the conservative movement who believe Islam is the enemy, I argue that there are real moderate Muslims, who need to be encouraged and supported in waging the fight within Islam against the uses of the Quran for radical purposes. These Muslims exist. We must support them, and not fall into the trap of backing imposters and charlatans who claim they are moderates, and who use our gullibility to pull the wool over our eyes, and who gain our monetary and political backing for what in reality are nefarious purposes dangerous to our national security.

But to view all Muslims as per se extremists is to give up this fight in advance, and to push real moderates into the hands of the extremists. If all Muslims are our enemy, we give credibility to the radical Islamofascists, Â who claim that their view of the Quran is the only true one, and if one is a real Muslim, they must join Bin Laden and the other radicals in their holy Jihad against the West.

This could be read as a strong argument in favor of welcoming the GZ Mosque, but Radosh doesn’t take it there.Â  He does provide an excellent overview of the spectrum of conservative thinking on the matter — worthy and otherwise.Â  (Why oh why does Pamela Geller have to be one of the most prominent voices against the mosque?)

Both sides of the controversy cite the First Amendment — freedom of religion vs. freedom of speech — but appealing to the Constitution is missing the point.Â  Nobody — no serious person — is suggesting the government should forbid the project.Â  What I and millions of other Americans (including many moderate Muslims) want is for the developers to find a new site.

And that’s exactly what the developers will do, if they are truly serious about wanting to build bridges.Â  As James Taranto pointed out, “If the intent of the Ground Zero mosque is ‘to bring Muslims and non-Muslims together,’ it is already a failure on its own terms.”Â  Reasonable people can disagree about who to blame for that failure, but the fact that the project is divisive is indisputable.

A Message to Conservatives: Is Islam Really our Enemy?